first things first, im told bushes apparently CAN catch on fire for no apparent reason. per my friend pete on gchat:

[mulch] ferments, it doesn’t decompose.
well, it decomposes. but it doesn’t dry out per se, it holds moisture very well, and if you were to use a pitch fork to overturn a large pile of mulch, it is not uncommon for steam to arise from it.
if you ever venture into a landscape supply yard and see a front end loader scooping mulch out, there will be a lot, a lot, of heat underneath.
enough to produce a fire, i don’t know. not likely, in my humble opinion. but that’s just me.
in the summer i would say it could happen.
it’s actually why landscape yards or tree service operations have to turn their mulch on a fairly regular basis.

it still sounds like a made-up thing. however, IF this true, i want to take this moment to make a public service announcement: WATCH YOUR MULCH AND BUSHES! THEY MIGHT RANDOMLY START ON FIRE.

in other news, im all achy and feverish and im pretty sure its because i slept like 4 hours the entire time i was in south dakota and my immune system is shot to crap.

also, i ate cheese while i was there.

It’s SOUTH DAKOTA people! have you ever BEEN there? they serve cheese with their gas.

plus i really wanted zesto’s ice cream, which is hands down the best ice cream in the whole freaking world. actually universe. actually in existence.

i want to be clear, i do not in any way think eating the cheese is what shot my immune system to crap.

also, i came back to the land of lincoln and was solid vegan on Tuesday, Wednesday and Thursday.

but then Friday came.

and i had some more cheese.

i wasn’t even going to write about this here, because im pretty sure vegans around the world will be all “CRYSTAL SUCKS AT LIFE!” but i figure there HAS to be other people out there who struggle at least ONCE in awhile with veganism. i mean they can’t ALL live near whole foods and humas-selling sandwich shops right?

anyway, i still want to be vegan, and im going to try again. i just wish i had even ONE vegan friend who i could go to for support.

oh! and also my friend lyndon, who i actually haven’t seen in person since my undergrad days at WIU, is in mexico doing some sort of research stuff i think. i’d rather he was here, in illinois, hanging out with me. but lucky for us the next best thing is available. he started a blog. and you can read it here. go on. go read it now. 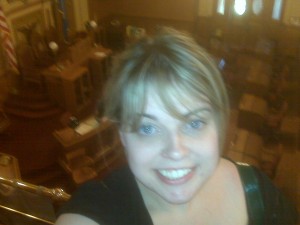 see the important state government stuff in the background?

i COULD post to these to facebook like every other person on the planet does, but then i wouldn’t get any blog clicks now would i? I just wish these photos (which I obviously took with my cell phone camera) could do the amazing state of south dakota justice. for that, you just have to hop in your car and go there. sorry. for all the rest of the pictures click the “continue reading” link below. i tried to post it so you could click “continue reading” and then go to a new page with all the pics so my blog wouldn’t have a bazillion photos on the home page, but it was messing up my coding, so instead you shall see them all there. and if you want to see them full scale, click them and they will fill your screen. i know. technology right?

Bronson walking up to a wind farm thingy

the future of electricity?

these hills are even greener in person

the dome in the South Dakota state capitol building.

Bronson in the statehouse

my friend dan on his boat

sorry this is crooked.

Bronson and me in the statehouse

the hill off the missouri river

Here’s the secret that nobody ever tells you about climbing the career ladder, not settling for dumb men and moving all the time – it’s lonely.

but this weekend i got to go back to my favorite place in the whole country – South Dakota. and i wasn’t lonely for even a single second.

i drove there with bronson. and we rocked out for the entire 12 and a half hour journey across Route 20. We stopped at lame tourism attractions (see: U.S. Grant’s house in Galena, Illinois) and tourism attractions we invented ourselves (see: wind farm).

we also stopped in Correctionville, Iowa where he was told by a gas station attendant with a heavy accent, that the town got its name after a curvy road through the community was “corrected” and made straight. true story.

and then i finally got to Pierre, SD and saw my amazing, awesome friend Wanda.

aside from the fact that she’s amazing and awesome, she has 7 kids so her house is ALWAYS  full of people and love and conversation.

and i got to stay there.

and we went out until 5 a.m. Friday night, and then woke up at 2 in the afternoon Saturday and got in multiple cars to drive over to the china buffet and share stories of how we went out. all of us sitting there talking over each other at one of those tables that stretches the whole side wall of the restaurant because there were so people in our group.

then i got to go on my friend’s boat. and he and his girlfriend fished, while Bronson and i soaked up sun like sponges left to dry on a white window sill on a hot summer day. we looked at the rolling green hills that surround the missouri river with our jaws open so wide that entire oranges could have fit through them. we took as many deep breaths of south dakota air as we could without hyperventilating.

we loved every minute of it.

but even with all that, my story wouldn’t do my journey justice without mentioning the boy.

but i can’t because im not sure he’d approve of me writing about him here.

i can tell you that he held me while we stood outside late Sunday night under the biggest sky you ever saw filled with flashes of stars. that looking into his eyes is such a magical moment that someone, somewhere should bottle it in little glass jars and sell them for $1 million each.

and that we shared a pillow while i slept in his arms.

just in case you missed that, i’ll type it again.

we shared a pillow while i slept in his arms.

is there anything better than that in the world? i felt safe, and happy and content and lovely and great and awesome. and all i really want to do with my life now is lay in his bed surrounded by white sheets and sunshine.

amidst kisses late Friday night he told me that i was different than he remembered me. that i had calmed down.

but i’d like to think it’s at least partly because, really, deep in my soul, i have calmed down.

i used to be a nut case. i used to constantly freak out that the WORLD WAS ENDING, or MY LIFE WAS ENDING, or that A TV SHOW WAS ENDING. and when i said those things then, i really meant them. now, those comments aren’t as sincere or as loud. i’ve managed to overcome my personal little world ending about 4 times in the last few years as i’ve started new jobs and moved around. and each time i’ve gotten back up and started over and nothing about the world ended. so i started to realize, that eventually everything works out.

i decided saturday to show the world that i was now a calmer version of my self by getting my ears pierced while in the mount rushmore state.

it’s the kind of thing i never would have done two years ago. i would have been scared and freaked out and crazy about it all and i would have insisted that the benefits of little pieces of jewelry didn’t outweigh the risks of the pain of a needle piercing through my lobes.

so now, every time i look in the mirror i get to see the magic. i get to see the little flashes of light from my ears that will forever remind me of a time when i wasn’t lonely for four whole days. and a state that God made to show us all what heaven’s like.