The only certainty is bad grammar > 2010 > February

Things people say about my weight that weird me out:

I bet you’re beating off the boys with a stick now.

Umm. Huh? First of all, no. No. I am not. I live in the suburbs, where every man is married with 2.5 kids and a upside down mortgage. Second of all, why wouldn’t I have been beating them off with a stick before?

What the crap? I lost 54 pounds. How in the name of all that is caloric are you not satisfied? What if I just want to keep it down for a while. Gawd.

Oh. Wow. I didn’t recognize you.

Really? You didn’t? For real? That’s insane. I still have the same eyes, nose and pink purse. You need to look closer next time.

I bet you’ll be married in no time now.

Really? Is that all I needed. You’re probably right. I mean, heck I saw a nice young man at the Wal-Mart yesterday, I bet he’ll marry me, what with the fact that I lost weight and all. Give me a break.

You’re skinnier than me now. You suck.

Umm. In fact, you are the one who sucks. I worked my behind off for the last six months so I could weigh two pounds less than you and you’re JEALOUS? Why don’t you just give up soda for like a minute, lose your stupid two pounds, and we’ll call it all even.

Do you feel healthier?

What does that even mean? It’s like asking if someone feels “30” on their birthday. I feel like Crystal.

Uh. Dude. I LOST 54 POUNDS! I think that should at LEAST qualify me for a, “You look nice today.” How are you not going to say anything?

And now, one that someone said that was perfect.

Courtesy of my little sister. Just out of the blue. All, “Your thighs look smaller.” Made me giddy for bathing suit season.

I met a boy this weekend while at a umm, place people dance to very loud music and flashing lights.

He’s super cute, and a Marine and I really like him.

And when we met in the middle of the dance floor, I was all “So, you’re a Marine? Have you ever been to Iraq?”

He shook his head yes.

Seeing as how I’ve written about 739 stories about soldiers who’ve been in Iraq, I then started asking him relatively specific questions about his experience. I asked about the weather, and the living arrangements and what exactly he did while he was there, and how long he was there, and how his family dealt with all the stress and I think I even asked him how he felt about Obama shifting focus so that more troops were headed toward Afghanistan.

And then, like three hours later, I was still bringing it up, and he looked at me, with these gorgeous brown eyes that reminded me bite-size pieces of milk chocolate, and said, “I’m sorry. I just can’t lie to you. I’ve never been to Iraq. I didn’t hear you when you originally asked me on the dance floor, so I just shook my head yes, and then before I knew what was happening I realized you thought I’d been to Iraq, and I couldn’t go back. But, I’ve never actually been there. I’ve been to Hawaii though.”

At least I know the man can’t lie well under pressure – that’ll probably be useful later.

Plus, did I mention he’s super cute?

What the Q? Adventures in Scrabble.

I got a 50-point bonus in Scrabble tonight, which I have never, in my entire word-spelling life, done.

Bam. Look at that awesome word. That is my new favorite word. Except, I can’t even be freaking happy every time I open up some Folgers, because I lost the game.

Did you read that? I LOST.

I had a 50-freaking-point bonus (which is basically a Scrabble leprechaun riding on a unicorn) and I still lost.

If this were football, it would be the equivalent of running the opening kick-off in for a touchdown, and then losing the freaking Super Bowl. (Oh. Sorry Hester. Still too soon? Wow. Ok. Ya. Sorry).

The Scrabble game was between myself and Mike, the guy I volunteer with once a month at the homeless shelter. You might wonder why I don’t have anything more interesting than a board game to talk about after just spending four hours at a homeless shelter, but in all honesty, Mike and I just sit in a church kitchen from 11 p.m. to 3 a.m., while everyone else sleeps in the open area behind us, and then the two of us say a silent prayer that nobody gets in a fight on our shift.

Plus, Mike is an evil-Scrabble genius who somehow got 98 points on single turns with strategic use of the letter Q. Seriously. 98 points. With a Q.

How is this not interesting?

I’m fairly certain he spends all of his waking free time practicing because there is no other way to account for the insane amount of points this man gets. Either that, or he’s cheating when I go to the bathroom.

Here are some visual aids just in case you want to steal our word ideas: 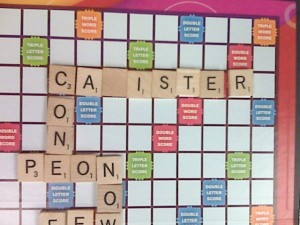 – This is a picture of the board with my bonus word. It is very pretty, so I took a photo, which I will save forever. Also, the words “peon” and “few” both were totally mine and both totally gave me crap-tons of points. 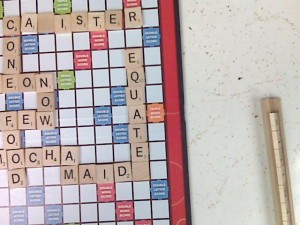 – This is Mike’s insane bonus word, which is really lame. I’ll probably delete this picture very soon so as not to ruin my affection for the word “canister.” Calm down Mike, I’m only kidding. (Mostly).