OMG!! OMG!! OMG!! There is finally verdict (ish) in the Blagojevich trial!!

In less than two hours we will finally, sort of, maybe find out this man’s fate!!!

It seems like just yesterday that it was 2005, and he was still an under-the-radar narcissist working in the capitol, and I was but a lowly intern stalking him for quotes at discrete back-door entrances to underground tunnels. Him, donning his forceful press secretary and blacker than black, black hair; me with my uncomfortable heels and a need to please my boss by getting even one word on the record.

Oh how I still vividly remember, where I gang-banged him with a slew of real reporters, as we huddled around him hoping against hope that we would get a quote or three. One time, I actually dropped my digital recorder, and he stopped everything so he could lean over, pick it up, and hand it to me.

Those were the days man.

And then, wow, I can still remember every stunning detail about his near-jail experience. There I was scrolling through an early morning breaking news alert on my pink blackberry (what ever happened to Blackberry?) while I sat on the toilet. Blagojevich Arrested.  Dec. 9, 2008.

Has it been two and a half years already, dude? Where does the time go?

No lie, it was pretty disappointing last time we were told of an impeding verdict.  Really jurors? All you could agree on was one freaking count? Really? For shame.

Now though, it seems as though the latest round of jurors has agreed on 18 glorious counts! How splendid!

I simply cannot wait to find out whether or not Blagojevich will be spending time in jail or on some sort of reality show in the fall. Could go either way, you know.

Personally, I’m rooting for an appearance on “The Voice.” That, or “Survivor,” would be Bleepin’ Golden.

I’m currently on a business trip in Hotlanta, Georgia at a candy conference. It’s awesome and wonderful and fantastic and I’m so grateful that my company pays for me to see the peach tree headquarters.

But, I’m so exhausted that I want to cry and sleep and take a hot bath all at once.

I originally needed to be here Sunday night, so I could have meetings starting early Monday, but I worked at church until about 8:30 p.m. Sunday night, so I arranged to instead take a flight out of O’Hare at 6 a.m. Monday morning.

This is the picture I took from my glorious window seat. Immediately after, I feel asleep and slept all the way until we started to land and my ears popped like pop corn. 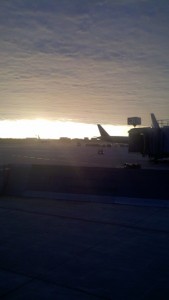 Then, when I got to town, I took a cab to the hotel where they held the conference last time I was here in February. Except, you know, OBVIOUSLY, it was not at that hotel this time. So I walked down two blocks to the RIGHT hotel and luckily they let me check in early as crap.

This is the view from my room. The random circle building looks interesting. 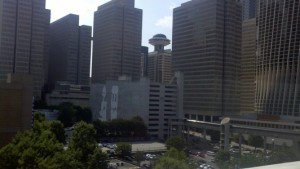 This is the couch in my room. It is full of my stuff. Ignore the underwear. Focus on the Fannie May Mint Meltaways in the yellow box, which I scored in my meeting with Fannie May. 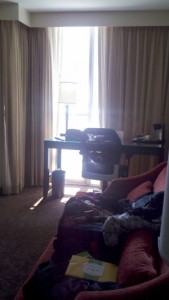 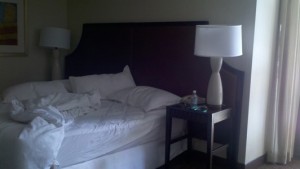 I also sat at a random table at dinner last night, and randomly Lee Dyer was sitting next to me. He is NFL referee #27, and he even gave me his official NFL card to me to prove it. The only picture I got of him was taken in a sort of stalkerish way, so it’s a little blurry. But here he is. Also, I have his email, so if you see him make any bad pass interference calls next season (assuming there is a season), let me know and I’ll shoot him a note. 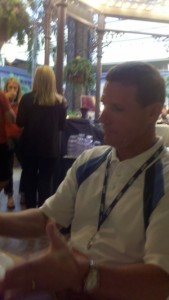 The first time I ever took a business trip that was more than an hour from my cubicle, my colleague Bronson and I drove from Pierre, S.D. to Sioux Falls, S.D. We covered Sen. Tim Johnson’s first press conference since his brain injury.  I was broke, and Bronson was broke, and my newspaper was broke, so we had to pool all our money for the gas and then, for dinner, we had to eat cold spaghetti out of a Tupperware container while standing by the trunk of my car in a random parking lot because we didn’t even have enough money for Taco Bell.

This whole thing started with a Brazilian accent.

I was dinning at a Brazilian steak house, surrounded by Brazilian Confectioners Association members and a Brazilian man next me was using his magical voice to explain why I should just try the chicken.

For those who have never heard a Brazilian accent before, my heart goes out to you because it’s basically a mix of sexy and vodka.

For those who have never been to a Brazilian steak house before, well, again, my heart goes to you, because it’s basically a gourmet meat buffet where waiters continuously serve you meat. And it is the. best. meat. ever.

So I had all this meat passing around me; and this sexy vodka accent next me explaining that I could just have a bite of the meat and then be a vegetarian again in the morning; and some sort of stronger-than-Hercules Brazilian cocktail in front of me and well, I was no match.

I tried to explain that I had not eaten meat in 10 years and so I should just stick to the salad bar. I tried to tell the man that animals are smart and we shouldn’t eat them. And I tried to stop drinking the cocktail.

I tried. And I failed.

And then, like I had been eating meat all along, I tried the chicken.

Followed by the beef. (I’m such a vegetarian, that I couldn’t even tell you what kind of beef it was or how it was cooked, only that it was brown and delicious).

I had every intention of waking up the next morning a vegetarian. And I did. For about 72 hours. But then the cravings became too much to bear. The “I can’t stop thinking about dead animals on my plate and my mouth is watering at the mention of four-legged creatures, and I really, really, really, just want some meat” cravings.

So a couple days later I dove right in with a grilled chicken sandwich at McDonald’s. Followed by my favorite of all meat dishes — the beef and cheddar croissant at Portillo’s. (Hey, if you’re going to rob a liquor store, you might as well rob a bank, am I right?)

To be fair to the Brazilian though, this all probably actually started a few months ago when I started eating fish. I was tired all the time, and my vitamin D levels were critically low, and really, I just felt like 10 years was long enough to go without tuna pizza.

My best friend said fish was my gate-way drug.

I know that you’re all thinking the same questions, so to clarify: No, I did not get sick (not even a little) after my first bites of meat. No, I’m NOT eating meat because I’m pregnant, because I’m NOT pregnant (mom!), and yes, it does all taste delicious.

I believe my little sister is most disappointed by my decision. She explained that she used to tell all her friends about her cool vegetarian sister. However, I then pointed out her own dietary habit of eating animals regularly, told her I was sorry, and that maybe I’d go back if she started.

No dice. At least not yet.

As for right now, I think I’ll go hunt down some sort of chicken sandwich with bacon, because that sounds fantastic. Am I right?