I have a 6-ft. tall Christams tree standing my living room. It’s decorated with multi-colored lights the gleam like a winter rainbow in front of my patio window.

There ornaments are mostly pink, silver and blue, and the bow at the top is a big red knot left over from a gift I got once somewhere. The tree skirt was the cheapest I could find — a $3.72 white fabric that’s meant to mimic snow, but succeeds only in that it’s white.

I also have a little 1-ft. tree by my door, with a little pink star on top. It’s perfect.

Then, in the corner, is a nativity set my Aunt Sandy gave me a few years back. I set out the fragile white pieces and wooden barn on two end tables covered in a green blanket, and drizzled with the white snow flakes from Wal-Mart.

And when I carefully placed the Shepherd and his sheep on the side, Mary by her son, the wise men in a line and the Angles on high, I was reminded how mystical the whole situation really was.

In the evenings, when the deary winter nights loom over everything, tainting it all with a sort of depressive awfulness, I like to sit on my couch, in the dark, with just the two trees lit up. Then, I let them work their nostalgia magic.

They bring me back to Christmas mornings of yore, when I would wake up my brothers a 4 a.m. to go downstairs and analyze our stockings. The remind me of the glorious time before I knew that presents cost money, parents are flawed and Santa isn’t real.

The reach in my heart, and wake-up the Christmas spirit.

And all I can think about is littering the tree skirt with gifts for people I love.

I want to see their eyes light up with surprise and excitement and joy and the knowledge that someone they know loves them enough to go out and find them the perfect vintage baseball card, or zebra pajamas, or electric Monopoly set, or Old Testament Lego book.

I want to get excited just by standing next to them.

And so, this Christmas, I will most definitely remember the reason for the season. I will spend much time reading Luke 2, listening to “Mary did you know,” and participating in Christmas mission work.

But I’ll also give into to the commercialism of it all a little bit too.

Because it’s the decorations and the gift giving and the “Jingle Bells” that help us achieve the not-so-small task of glimpsing the magical innocence of the holiday each of us beamed with in our younger years.

And it’s the twinkling majesty of the season that nudges us with the overwhelming awesomeness of our Savior being born. 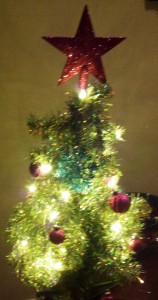 Things I’m thankful for this year:

1. A washer and dryer in my apartment.

2. The praise band at my church that takes our services to the next level and connects the congregation to the Holy Spirit.

4. Cable TV that comes with On Demand service for USA and History channel, even though I only have basic channels. Yay for Burn Notice, Covert Affairs and Ancient Aliens.

5.  KLOVE radio, which helps me worship God during my commute.

6. Words with Friends, which keeps me busy even when I pee.

8. My aunt and uncle coming up from New Orleans to visit and then getting just as excited as I do about Black Friday shopping.

9. All the hours in the car I spend with my little sister Monica listening to Christian music and talking about life.

10. All the times my mom saves me from the brink of any of the following: Going bankrupt, total depression, car accidents.

11. My dad’s pending wedding. Yay for him for finding love.

12. My brothers coming up for Thanksgiving and finally being able to stay for Black Friday.

13. A job that lets me work from home two days a week, and keeps me stocked with delicious candy at all times and also sends me on trips to fun places like Orlando.

14. Eric Jensen’s true commitment to the Crossroads UMC youth group, and his ability to work with me even when I’m super stressed and a little bit crazy.

15. Jesus Calling, a devotional by missionary Sarah Young that helps me start my day connected to God.

16. Pastor Wes, for, among other things, leading an intense Disciple class that is truly giving me a stronger understanding of God’s word.

18. All the youth at Crossroads who keep showing up every week.

19. A free couch that turned my house into a home.

20. Youth Works, for changing the lives of everyone who goes on their mission trips.

21. My first Thanksgiving as a meat eater in about 10 years.

In college, the married man who sat across from me at the student newspaper would make unwelcome comments about how I should be a model, and how pretty my eyes were and just how dang good I looked in blue. And then he would constantly stare at me, for inappropriately long amounts of times.

Then, in grad school, a security guard at the state capitol building decided he liked me. He would come up to me every day and ask me for my phone number, or ask me on a date. Every day. And going to my internship at the best building in Illinois suddenly made me want to throw up as I tried to avoid him while going through security. Every. Day.

Then, at a newspaper job I had after college, I was just one of the 20-something women who had to endure being hit on by a married editor at the newspaper. And one night, the two of us ended up in a car alone together, because he was drunk and convinced me he needed a ride, and then he tried to kiss me and then the next day, I had to work with him like nothing had ever happened.  Which I did, because saying something would have been worse. I knew that much.

All of those incidents left marks on my weak heart. They made me feel like an object in the purest sense of the word. And they led me to believe that women were not equals. Not even close.

I understand that men don’t always know they’re being inappropriate.

I understand that women like to be hit on.

I understand that people think being hit on too much is a “good problem” and that women should just brush it off.

But I also understand how sick to your stomach it makes you feel when you realize that politely saying no to someone’s advances is being ignored — or worse, that a polite advance has suddenly become less-than-polite without warning.

I understand that sexual harassment is not about a women’s ability to properly take a dirty joke or their ability to just be flattered for goodness sake.

I understand it because I’ve lived it.

I also understand that reporting it is awful and full of aftermath that leaves everyone, especially myself, wishing I had just kept my mouth shut. And that any women who decides to do so is brave and amazing and should be respected.

So while all the controversy around Herman Cain is in the air, and people are saying things like, “Well, that there is a troubled woman,” I implore you to take this opportunity to remember the women you love, and how you want them to be treated in such cases.

Because, your mom or your sister or your daughter probably feels like throwing up or crying or screaming every time they have to pass by that one guy’s desk or go down that one hallway where he works.

They are probably praying every night that he’ll quit or get fired, and they’re probably starting to find a way to quit themselves.

They’re probably wishing they could fix things without first making a huge mess.

They’re probably looking for someone to save them.

And — most likely — nobody is doing anything about it.