My doctor told me not to eat chocolate for at least 30 days because the my stomach lining is swollen and I have an ulcer in my intestines and apparently chocolate is bad for those things.

And I was all, “But, umm, I write for a candy magazine. It’s literally my job to eat chocolate.” And she was all, “He He He. You’re so funny. Just eat other candy.” And I was like, “Whoa. This sucks.”

And then I went back to work today after being out sick Monday and Tuesday and Wednesday and wouldn’t you know that I got a sample box of 16 chocolates with a retail price of $48. Those are some seriously amazing chocolates.

And they were all amazing. One had passion fruit in the center and I loved it.

Backing up a few steps, for those who don’t follow me on Facebook, I was in the hospital Monday and Tuesday. Apparently I have gastritis in my stomach and the aforementioned ulcer. It basically feels like someone took a metal bat to my side.

And because gastritis rhymes with bronchitis, I can’t help but quote this amazing women pretty much all day, every day.

You’d be shocked to learn how often I can tell people I wanted a “cold pop!”

Anyway, so ya, Monday morning I woke up, and my side hurt and I thought I was going to die, and so on my way to work I figured I’d just swing by the emergency room — you know, to see how long I had.

They pumped me full of morphine like the second I walked in the door. Then they X-rayed my chest, but nothing showed up. So then they gave me a CT Scan and it turns out that I am one of the few people who vomits after being pumped full of the dye they rush through your system right before they take the pictures. So, ya, that sucked.

And then they were all, “The CT Scan looks pretty good. We think you have an ulcer. We’re going to keep you overnight so we can better manage your pain, and then tomorrow we’re going to stick a camera down your throat and take a look around. Cool? Cool.”

And I was like, “OMG!!!! What if I wake up while you’re sticking a camera down my throat?”

And the dude was like, “Ya, that could happen. But you won’t remember it.”

Which wasn’t exactly the response I was hoping for.

I slept with an IV in my arm and every single time I bent my elbow the alarm on the IV beeped like an insane person worried the sky was falling and then I had to call a nurse and I think the nurse got annoyed that I kept calling, but she wouldn’t tell me how to shut the IV off myself when that happened, so whatever.

The two of them rotated between the bed and the couch.

Here is my mom on the couch: 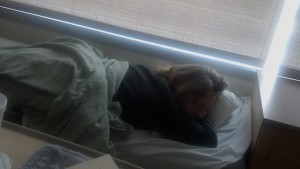 And here is my poor grandma sleeping on the chair: 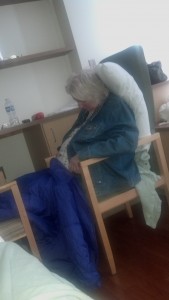 I’m really sorry you had to sleep like that grandma!

My brother Steve was also by my side for most of this crazy hospital adventure. He served as the coherent person in the room when I was doped up on morphine and the doctors were trying to explain crazy things to me about my intestines.

Of course, my amazing boyfriend was there as well. He held my hand through everything and was awesome and brought me roses and I love him because he is so awesome. And once, when the nurse was pumping drugs into my IV, I was holding his hand and the nurse was all snark and all, “What do you think is going to happen?” And I was all, “Nothing. I just like to hold his hand.” Boo-ya!

Now, to answer the question I know you’re all thinking: How the heck did my stomach get so screwed up? Well, it turns out that taking 9-12 Advil a day, every day for 10 years can mess you up. I basically can never take another Ibuprofen again for the rest of my life. Ever.

Also, for the next 30 days I can’t eat tomatoes, drink soda or have large meals. So far so good on all of those, even though before this happened I basically lived pop and large, heavy tomato-based meals. The last restriction though — no chocolate — well, ya. I hope the doctor wasn’t super serious about that one.