I finally got to meet you!

Well, I guess, technically, I got to meet you when you were still a wee little thing in your mama’s belly a few months ago. But now. Now you are right in front of my eyes! And I am in love!

It’s such a beautiful name.

And look, I know that everyone says this about their best friend’s baby, but you are the most handsome little boy in the world. Seriously. Your mom did a great job baking you.

Your little ittie, bittie hands are obviously going to make your daddy proud someday, when you throw footballs as the first string quarterback for the Super Bowl-winning Chicago Bears.

And you’re already showing signs of your athleticism. At just three weeks old, you are scooting up and down your mommy’s bed on your back. I bet if there was a race between you and all the other three-week-old babys in the neighborhood on who could scoot the fastest, you would totally win.

(As an aside, you should know that both your parents are the MOST competitive people in the world. Don’t be surprised if your mom turns random, daily things into a race early on. As in, “Let’s see how fast you can get dressed! And Go!” or “Let’s see who can pick up the most toys! And Go!!” And, while I haven’t known your dad as long as your mom, I can tell you that he can do more squats than anybody else, ever).

You are still so little and so adorable that you are in that wonderful stage when every single thing you do is gloriously noted.

“Look! He opened his eyes!”

And your mom is pretty cool too. No. Seriously, she is.

Anyway, I can tell you from experience that she is going to do everything in her power on this planet to make sure you have the very best life possible.

She already is. She’s breast feeding, talking about cloth diapers, and from what I understand she didn’t even get an epidural! (That’s love right there).

I also want to tell you how beautiful she looks as new mom. I’m sure you already know that, but just in case, I wanted to say it again. She is seriously beautiful.

She claims to be exhausted, but her long, brunette hair hangs down her back when she holds you, and her skin is as clear as a summer sunrise.

In fact, the two of you make a pretty beautiful pair. You, with your soft, brown hair; her, with her gentle smile.

But you seem to already know that. You fall into a deep sleep whenever you know she is near. And you never cry long once she picks you up.

You have total faith in her. And so do I.

Because like I said, she and I go way, way back. And if there’s anyone I know who could raise a baby boy, it’s her.

All I ask is that maybe you could start sleeping through the night a little earlier than you planned. I know that seems like a LONG six or seven hours, but your beautiful mom could use a full night’s rest.

Other than that though, just keep doing what your doing — being amazing. 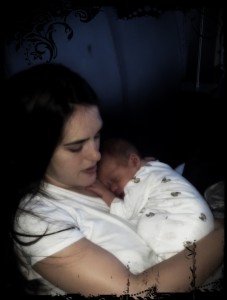 I’m not exactly sure what I expected to happen today at the doctor’s office.

Honestly, I genuinely thought I wasn’t expecting anything at all.

But when I looked at the man who’s been treating me for the last few months, and told him that I had indeed quit my job at the church, and would be moving in with my mom who lives near Rockford and that I needed a referral, I guess I just thought he’d have some sort of reaction.

But he didn’t really. Or, well, he didn’t have the reaction, I guess I wanted him to have.

He just gave me the same stupid nod he’s been giving me all along.

The same stupid nod he’s been giving me at every appointment for the last four months, no matter what the situation was. The same stupid nod he has used to say hello or to pathetically try to reassure me when my eyes were filled with tears of desperation, or to falsely tell me he was working as hard as he could when I couldn’t sit upright long enough to ask even one question.

I don’t know why I expected anything different this time.

He said it was probably going to be a good thing for me that I’m going to be quitting my job at the church and moving in with mom. I’m assuming it’s because he thinks the extra rest will be good for me, but he never actually articulated that.

He rambled on about how I would need to request my records once I got settled in with  new doctor and specialist out there. He told me how the doctor or the institution couldn’t request the records, but how I had to request them myself. And how I could probably fax a request, or if it was easier I could call in a request, but either way, I would have to make the request.

And then, because he was at least self-aware enough to know that he was rambling, he apologized for sounding so convoluted about something that neither one of us really cared about.

Then, he just said he’d be available if I had any other questions before I moved, and he scurried out of the room, like he was relieved to be getting rid of me.

I guess I can’t really blame the guy. Everything he tries to do to fix me fails miserably.

It’s just, I realized, in that moment, as my eyes started to tear up, and I was suddenly hyper aware of the constant stabbing pain in my lower right ribs, that I had hoped for something more from this man.

I hoped that when I told him I was quitting my job at the church, and leaving behind one of my true passions, that I would get some sort of a reaction. That maybe then he would finally understand the severity of the situation. And maybe he would suddenly remember some new treatment, or pull some magic pill out of thin air that he hadn’t mentioned before and he would try it on me, and it would work and I would be better and I wouldn’t have to leave the church after all.

Or maybe he would apologize. He would cry with me, and hold my hand and tell me how sorry he was that he couldn’t help me find relief after all this time. That he would tell me that he knew how hard it must be for me to go through so much at such a young age, and how being in pain all the time must be near impossible for me to deal with. And he would tell me he wished he could have done more to help me.

But he didn’t do do any of those things. He just nodded, and then he had his resident refill a prescription for a sleeping pill I’m on.

So I grabbed my huge medical binder, my tablet with all my questions for the appointment listed on it, and my purse and walked out the door with tears in my eyes.

And it hit me.

I really am quitting my job at the church and moving in with mom.