The only certainty is bad grammar > humor > all part of what my roommate calls, his life goal of dominating his humans.

all part of what my roommate calls, his life goal of dominating his humans. 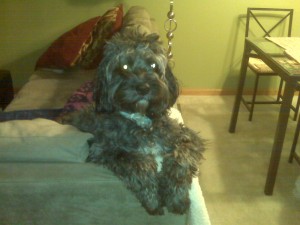 black jack has devil eyes here. coincidence? i think not.

when i got home from work today, i was STARVING people! so i started boiling water for my box of $1.29 generic deluxe mac and cheese with the cheese packet. and i was expecting to hear the dog freaking out because I WAS HOME AND NOT LETTING HIM OUT OF HIS CAGE THIS INSTANT!!!!!!!

but instead, all i heard was silence. i thought maybe he was just in a deep sleep, and i was actually relieved that i could eat in peace and take him out on MY schedule. but then, because i’m an idiot, i started playing the “worst case scenario” game in my head. it went something like: oh my gosh. what if something happened to him? do you think he’s ok? maybe he got his mouth caught in the cage and he can’t open it enough to yell for help? or maybe he died. CRAP! maybe. he. died.

then i started picturing how i would react if he had died, because I’ve never actually lived with any animals (except, of course, venus the beta. but that fish was dead about 2 hours after i brought it home from wal-mart, so there wasn’t much time for attachment and stuff). i thought i’d probably cry, or at least get a pretty sad. and then my “worst case scenario” game got the best of me and i went upstairs to check on him.

and he was fine.

and i realized this was all part of his master plan to manipulate me into coming upstairs so he could give me the “I’m the cutest dog in the whole wide world” look and i’d be forced to take him out of his cage. he’s crafty this one i tell you.

so i took him outside and let him pee supa quick seeing as how it was like negative a million out. and then, because im the worst dog mommy ever i put in back in his cage so i could finish cooking dinner and then, you know, EAT said dinner.

holy sadness, did he cry. and it wasn’t even cries of anger, which are easy to justifiably ignore. no. they were cries of complete depression. i mean he was sobbing. and don’t really understand why, seeing as how i GAVE him a fake piece of bacon to go into the cage. what the heck did he want from me?

but the crying got to me, and after i finished my mac and cheese with a side of soy burger, i decided to put on 56 layers and take him for a walk. I hooked him to his retractable leash, grabbed a wal-mart bag for the inevitable gross part, and the out we went.

only about a block down, and three minutes after the gross part (yes, I am at this point, holding a bag of poop) he somehow broke free. and this little black dog can RUN people. and “worst case scenario” game kicked in to turbo mode, and i started freaking out that someone would accidentally hit him with their car. so i started sprinting past garages yelling “BLACK JACK!!!! BLACK JACK!!! COME HERE BOY!!!’ while wildly flailing a bag of poop. only, he didn’t realize this was all VERY DANGEROUS, and instead, thought this whole thing was THE FUNNEST GAME EVER!!!! so he kept running, and then turning back toward me to let me catch up just.a.little and then running some more.

finally though, i ran fast enough to catch him. ok. i didn’t. im not fast. instead, his leash got caught in the snow i was able to step on it and grab his collar.  and i was all, quick. did anyone just see that? no. phew. ok. while simultaneously catching my breath and yelling at him. only he was just galloping through the snow toward our house, like he hadn’t just almost killed himself.

i finally got him inside and realized two things. a. this dog had ALL DAY to plan this, so i shouldn’t be too hard on myself. and b. i need to get those grippy gloves to i don’t lose his leash EVER AGAIN.