Yesterday was awful. I was working from home and I managed to stay with my laptop until about 3:30 p.m., but then, after that, I just laid in bed and watched hours and hours of TV while I prayed for the Hydrocodone to work. But it never really did.

Today was sort of alright, so I took a shower. I know. Crazy, right? To be honest, I’m pretty much at a stage in my life where I only shower two or three times a week. All the effort and the moving my right arm to wash my hair just seems to make my ribs hurt more, and it’s just not worth it to put myself through that every single day. I used to at least put dry shampoo in my hair on the off days, but that stuff doesn’t really work that great, so I’ve pretty much given up on that now too. Instead, I just throw my hair up in a bun.

I do shower the one day of the week I drive into the office, or when I’m traveling for business. Obviously. Gawd, people, I have some standards.

Speaking of work, I’m flying to Atlanta tomorrow to go to the National Convenience Store Show. It’s my third business trip in six weeks. After this though,  I should be in Illinois for the rest of the year.

My boyfriend’s technically from Atlanta, although he only spent five years of his life there. I spent four years of my life in Macomb, Illinois going to WIU, but I barely even remember how to get there. He, however, still roots for the Atlanta Braves like they’re his hometown baseball team. I think it’s because the Cubs (his second favorite team) well, let’s just say they have problems winning and stuff.

Anyway, I miss my boyfriend. Lots. We are still managing to see each other at least once or twice a week, but the long distance thing sucks. Lots.

And my ribs still hurt. I think deep down he’s still hoping I’m going to get “cured” but that’s looking less and less likely.

I did get in to see a doctor at the University of Wisconsin-Madison recently.

It’s university-level care, so it should be top notch. He was pretty cool, and he didn’t seem overwhelmed by my case, so I’m going to stick with him for awhile.

He referred me to their pain specialty department, but they won’t even make an appointment to see me until they get all my medical records from Loyola. It’s been three weeks and Loyola still hasn’t sent the records though. So I’m basically in holding pattern.

And I’m spending my days trying to space out my hydrocodone waiting to see a pain doctor who hopefully won’t freak out about me being on opioids. The last two refills I got on that drug have been from primary care doctors and both of them have been super weary about giving it to me.

And let’s be honest. If only need four in a day, I’m having an AWESOME day.

On aside, my new doctor did say my symptoms were very severe for someone with intercostal neuralgia. He said he thought I might have Complex Regional Pain Syndrome (CRPS) in my ribs, although he followed that up by saying that CRPS is usually only in your arms or legs. And everything I read online seems to confirm that, so I’m not sure how correct that was.

He also added a new medication to my list of prescriptions, but it doesn’t seem to be helping much. Although it’s one of those long-term meds, so it takes at least a month before you know if it’s working.

And, as of right now, the pain is still horrible.

I was having a hard time eating yesterday because I was in so much pain, and I turned to my mom and I said, “Well, I guess I have good days and I have bad days.”

And she said, “What’s a good day look like? I don’t think I’ve seen one of those.”

I’m having a pretty good day.

And by that, I mean, a pretty good “pain” day. That’s how my whole life is defined now.

Yesterday I was in agony.

Or maybe God was just p*ssed off at me.

Whatever the reason, the pain was awful, and so, I ended up taking extra hydrocodone.

As of right now, I have about three pills a day to get me to my next refill.

I already know that’s not going to be enough.

Here’s the thing, it’s not that I used to judge people who used excessive amounts of painkillers in the past. It’s more that, before I got sick, I just never even thought about them.

But now. Now, I sit down on Sunday mornings, open the orange prescription bottle, dump out the pile of powdery white pills, and count out each individual one, and by extension calculate how much pain I will have to endure over the next three weeks.

I already know that there is no way I can get through the next three weeks with three pills a day.

But, my experience with medical professionals thus far though has been, “Oh well.” As in, “You better find a way, because as long as you’re not bleeding out, it’s not our problem.”

But that’s the thing, it really, really does feel like someone is stabbing me with a butcher knife.

I have endured the worst pain in my entire life over the last six months.

Pain that makes me consider suicide on a daily basis. As in, I seriously plan out how I can kill myself. As in, I was seeing a psychiatrist who specializes in helping people who deal with chronic pain because I was fantasizing about driving my car off the road or swallowing all my pills before I went to bed at night.

I am in that much pain on a regular basis. And I am not exaggerating when I tell that you that there are things in this world worse than death.

But because I am not visually bleeding out, because my blood work comes back normal, because nothing ever shows up on any MRIs, I get 120 hydrocodone a month, and no more.

If someone rushed into the ER with a gushing stab wound, they would never be denied the pain relief they need.

Or maybe they would. But that would be tragic.

Because pain eats at you. It messes with your head. And it changes you so much faster than you think it will.

I want to take it so that I can get some relief from the metal claw digging into my ribs and maybe think clearly enough to see into tomorrow and remember that I do want to keep on living.

It’s so, so easy to sit on the outside of pain and judge people though.

“Well, you can’t just depend on the pain pills, because you’ll end up building a up a tolerance to them, and then where will you be?”

“You need to take the number of pills the doctor tells you to take because that’s what the doctor says and that must be right and he must know exactly how many pills it will take to take your pain away without giving you a drug addiction.”

But that’s all bullsh*t when you’re in so much pain you want to kill yourself.

Or maybe you are different.

Maybe you would have a clear head and think differently in that situation, and maybe you would be able to endure hours and hours of the worst pain you’ve ever experienced, while a bottle of hydrocodone pills that could give you the relief you need were sitting right there on your dresser, and maybe you wouldn’t reach for them.

But I doubt it. 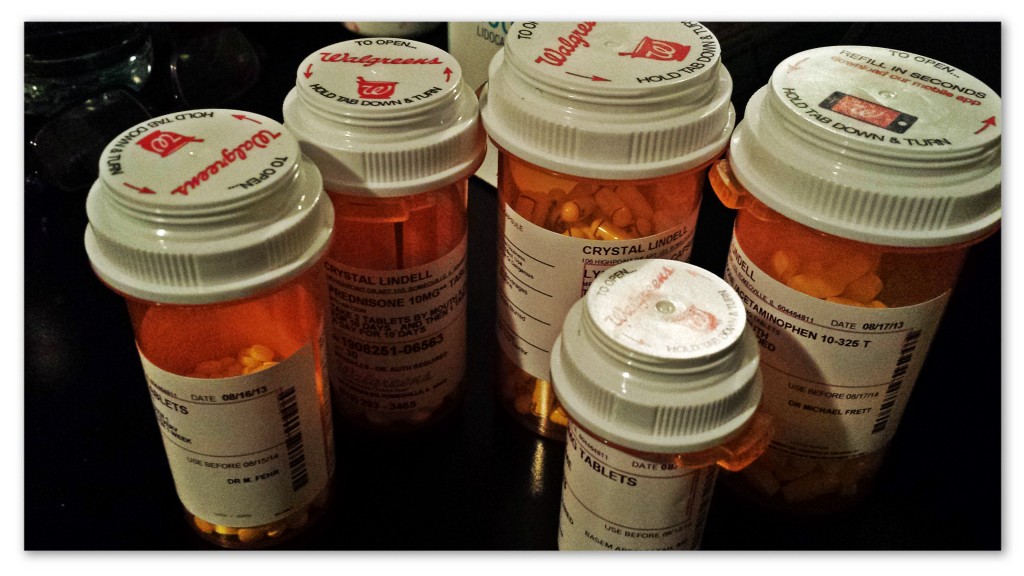 So here’s the number two most horrible thing about being in pain all day every day (number one being the horrible pain): I’m totally gaining weight and it sucks really bad and I literally don’t know how to stop it.

And before you give me some crap line about moving more and eating less, let me explain some stuff to you.

The pain killers and the nerve medications both list weight gain as a possible side effect. Because of course I didn’t get the random chronic condition that comes with medications that cause unexplained weight loss.

And by “weight gain as a possible side effect” I mean, like I’ll go to the doctor on a Thursday and weigh one thing and then I’ll eat like normal amounts of food (maybe even a little less than normal if I feel particularly crappy) and do normal amounts of things and by my next doctor’s appointment on Monday I will have gained four solid pounds.

And yes, I know that part of this is because I spend so much time with my new BFF, the couch. But that’s because when I do things, like say, shower, or walk around a grocery store, I feel like death afterward.

And so, no, I’m not really burning off any calories. But when I do burn them off, I want to cry and die and drug myself to sleep.

I also know that my eating habits haven’t been the best lately.

But I’m just going to throw it out there that I feel like I’m dying more often than I don’t, and that kind of thing screws with your head in ways you wouldn’t expect, and so yes, many times, when I eat, I’m like, “Dude, whatever, give me another taco. I’m probably going to die tomorrow anyway.”

Like, honestly, I really think I’m going to die tomorrow, pretty much everyday. That’s how much pain I’m in.

Because this is my blog and I want to be honest in this space, I’m just going to go ahead and confess that since February I have literally gained over 40 pounds.

In six months I have gained 40-freaking pounds.

I talked with my neurologist, and he switched me from one nerve medication to another, hoping it would help, but I’m still gaining like a pound a day.

Like seriously, I gained 10 pounds while I was on a mission trip, eating sandwiches and one scoop of noodles for dinner every night and painting houses all day.

I mean, don’t get me wrong, everyone in my life has been super amazing about it. My boyfriend has not mentioned it even once, not even in passing. And, neither has any of my family members. And I know that all the kids in my (soon-to-be former) youth group love me dearly, because they are so amazing that I seriously get the impression that they don’t even notice.

So yesterday, I was like, screw this, I’m going to try to do something. And so I went for a walk.

I mean, ya, when I came back home and sat on my couch, it felt like my ribs were literally going to explode off of my body because I was in that much pain. But the walk itself wasn’t so bad, what with the help of a the prescription pain pills and whatnot.

Anyway, as most of you know, I’m moving in with my in a couple weeks, and I’m hoping the change will help me eat a little healthier and walk a little more. (My mom seriously loves walks).

In the meantime though, I’m just trying to find lots of reasons to wear yoga pants, because nothing else I own fits me anymore.