Yesterday — partly because of my own stupidity and partly because the only pharmacy in Byron, Il closes at 7 p.m. — I had to go off hydrocodone cold turkey.

And it was hell.

I ran out on Wednesday evening and I immediately went over to the pharmacy to ask them to call in a refill. But, the doctor’s office was already closed. So they said they couldn’t refill it until the next day.

No big deal. I could make it through the night. And I didn’t want to make a big deal of it and come off like a crazy drug addict.

So, back home I went.

And normally going one night really wouldn’t be that bad, because I take a pretty strong drug to make me fall asleep every night.

But the thing is I had to go into the office the next day. On no pain drugs. And, because my office is two hours away, that meant I wouldn’t get home in time to pick up the prescription before the pharmacy closed for the night.

My mom ended up driving me into work because I have realized that the two-hour drive each way makes me suicidal.

Even with her help, going off the hydrocodone cold turkey was still enough to almost kill me.

When I got to work I headed right for the bathroom, because I had buckets of diarrhea shooting out of me.

My palms were sweating and my rib pain was intensifying.

I lived through that and went to a morning meeting.

After that, I had planned to go to lunch with my mom, but suddenly my boss decided she wanted to take our team out to lunch so all of a sudden I had to look professional for a two-hour business lunch while I was in opiate withdrawal.

I popped some Tylenol hoping they would help take the edge off.

After I got back from the lunch I told my editor that’d I be over to his office in a bit to talk after I finished up some work at my desk.

Then, I ran to the bathroom. More diarrhea.

I was so weak, and my muscles hurt so bad that I just sat on the toilet with my jeans around my ankles, leaned my head against the blue bathroom stall, and prayed to die.

I got myself together, pulled up my pants, washed my hands and made it back to my desk, where I laid on the floor, resting my head on my puffy pink coat, until I could find the will to stand up again.

When I finally walked over to my editor’s desk to talk about the newsletter, so much time had passed that he said, “Wow, you must have had a lot of work to do. I thought you might have left for the day.”

We chatted for a bit, and then I ran back to the bathroom. More diarrhea.

I wanted to go to the hospital so bad. My ribs hurt like hell. My body ached all over. And I just wanted to be dead.

I thought about laying on the floor by my desk in the fetal position and making my mom come up to the office to get me.

Instead, I gathered up all the strength inside me, and got my things together so I could go home for the day.

As I walked over to say goodbye to my boss, I thought maybe I had at least pulled off giving him the impression that everything was fine. But when I told him I was leaving, he said, “Wow, it looks like you barely made it through the day.”

I tried to sleep on the way home, while my mom drove, but I was in so much pain that I wouldn’t really call it sleeping. Needless to say we didn’t make it home in time to get to the stupid pharmacy before they closed at 7 p.m.

And so, I had a long night ahead of me.

I tried to go to sleep as soon as I walked in the door, but every single joint in my body hurt.

It felt like a knife was in my ribs, and pain was radiating through my bones. I kept having to run to the toilet because of the diarrhea, but there was nothing left inside of me to come out.

I prayed for relief.

I prayed with all my heart that God would let me die that night. That he would take my life. That I would finally get the true relief I’ve been seeking for months and I would get to go to heaven.

I begged God for this to end.

My ankles felt simultaneously swollen, sprained and twisted. It felt like I had full-on tendonitis in my wrists. My body felt broken — all over.

And I didn’t think I would make it through the night.

I tossed and turned all night.

I thought that once it got out of my system I would never go back on it.

But even as I thought it, I immediately knew it was a lie.

I knew I would go back on it the very second I got a refill in the morning. I knew because while my whole body was attacking me, there were my right ribs, screeching at me, haunting me, reminding me that I needed the hydrocodone.

My amazing mom drove to the pharmacy this morning to get my refill, and when the new dosage kicked in, I finally felt like I could breathe again.

I don’t want to be on this stupid drug. I really, really don’t. I hate that half the doctors I see accuse me of being a drug addict. I hate the I have to constantly wonder if I am a drug addict.

But more than that, I hate living my life feeling like I’ve just been stabbed in the ribs.

I am not one of those people.

Quality of life matters to me.

Having even a few hours a day when the pain is at a minimum is important to me. And if that means my body is physically dependent on a federally regulated opiate, then so be it.

All I can tell you is that the pain that stabs through my right ribs every single day of my life really is that bad. 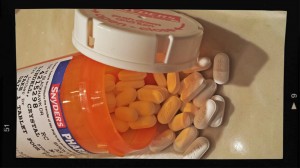 I still think about suicide all the time.

It’s hard. To be in pain every minute of every day.

This morning was especially bad. I had a hard time getting out of bed, and the pain was wretched, and my mom just laid on the bed with me and talked to me while I waited in vain for the pain pills to kick in.

But they never really did.

And so I ended up taking more than the recommended dose of hydrocodone so that I could stand upright long enough to get through a shower.

I hadn’t showered since Monday, and today was Thursday and four days is really the longest an adult should go between washing themselves regardless of how bad their right ribs hurt. Plus, my little sister had a very important doctor’s appointment in the afternoon that she really wanted me to go to with her, and when I see people I’m not related to I like to be semi-clean. So, I summoned all my strength and cleaned my hair and washed my body and put clean underwear on and went to the appointment.

But the pain pills only last so long. And I’m getting to the end of my monthly supply, which means I have to make each dose stretch as long as possible, lest I run out and have to go through crazy withdrawal symptoms on top of my insane amounts of rib pain.

And so, I spent more of the day in pain than I did not in pain.

And I thought about suicide a lot.

At one point, my mom and sister and I were in a department store and the two of them went to the bathroom and I waited on a uncomfortable wooden bench and I was in so much pain that I couldn’t even hold myself upright long enough to wait for them so I had to lay down on the bench and all I could think was, “I just want this to be over. I just want to be dead.”

And I was thinking, “I’m here, in a department store, with probably at least a hundred other people, and I feel so alone, so sad. And with all these people around me, I have no idea how to ask for help.”

We walked the aisles of a Barnes and Noble and I searched and searched for a book about pain. I wanted to find something, anything by someone who had endured what I was going through. Something real, about what it’s like to live this way.

But nothing. I couldn’t find anything.

And I started crying.

And I pray for God to give me relief. But he never answers.

So I just pray to die.

But God never answers that one either.

But the pain. It just messes with your head.

It makes you crazy so much quicker than you ever think it would.

Everyone is always asking me, “How are you?”

And if they ask me in person, they always have this weird look in their eye, like they’re confused by the fact that I don’t really look sick.

Well, I feel like I’m dying pretty much all the time, that’s how I’m doing.

I wake everyday feeling like a butcher knife is in my right ribs. And the pain is so horrible that it literally wakes me up in the middle of the night, like a demon that has entered my body.

And that’s usually what I tell people.

When the pain pills are working, my answer shifts to, “I’m doing alright, but it’s only because of the hydrocodone.”

I think that response kind of embaresses my boyfriend though. He’s always hushing me. Telling me to stop telling everyone I’m on drugs.

I feel like it’s important to note that though. I feel like people should understand that the only reason I’m currently able to stand upright and have a conversation with them is because I’m on a constant stream of opioids.

I guess it doesn’t really matter what they think.

But I feel the need to tell people. To put it out there: I’m in pain. All the time. And if I’m not, it’s only because I’m on drugs.

I suppose maybe it makes people uncomfortable when I respond that way.

But maybe, one day, someone will say, “How are you?” and I will finally be able to smile and say, “Good.”

And when I say it, I will be able to mean it. And they will know I mean it.

Because I wouldn’t say “Good” if it wasn’t true.