Sunday night I went a blind date and he did amazingly well at picking the place.

We ended up at a comedy club and the guy scored like 7 katrillion points by not making me endure a cup of coffee or an awkward trip to the movies.

And he was normal enough, but I guess he wasn’t into me because I haven’t heard from him since.

But that’s all right, because, back to the comedy club, guess who my waitress was? Uh, ya, that girl who dated that guy that I used to kiss sometimes at Western.

Thankfully, she didn’t seem to recognize me. Either that, or she totally put bugs and snot in the spinach dip. But seeing as how she didn’t beat me up, I put the experience in the “win” column.

And then, I decided to call that guy. We’ll henceforth refer to him as the Puerto Rican. Wait, that’s too broad. I date too many Puerto Ricans. Hmm. Ok. How about the “Guy from college.”

So ya. I called Guy from college. And one thing led to another and well, long story too short, a few hours later he was kissing me good night.

What are the odds?

How I started Saturday night: 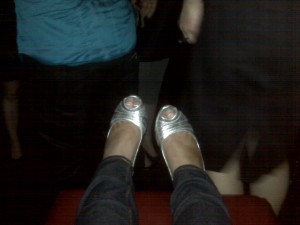 How I ended it: 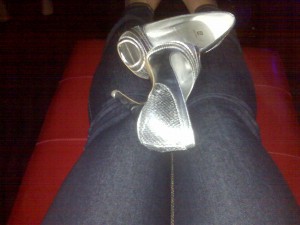 I suppose I should I just know by know that a 22-year-old boy is not going to be good at making and then keeping plans.

This is my fault.

I’ve dated craptons of stupid 22-year-old boys and none of them ever has ever once ever been good at keeping plans.

So I should know better.

But this boy is driving me insane!

I WANT TO KNOW THOSE THINGS.

He’s carefree, and  go with the flow and “whatever man”

I like it because I find myself watching “Four Christmases” on his couch while he jumps next to me and then grabs my hand and a suddenly a crappy movie is the best movie I’ve ever seen.

And I find myself wearing his favorite Cubs sweatshirt and having Saturday afternoon lunch together at a very dim and very intimate TGI Friday’s while the rest of the world is running errands and then walking through Best Buy hand-in-hand on a whim and thinking about how much I love spending time with him.

And I find myself smiling all the time.

Those are the kinds of things you can’t plan.

But this weekend, I wish, just maybe, we could set a time for dinner.