I suppose I should I just know by know that a 22-year-old boy is not going to be good at making and then keeping plans.

This is my fault.

I’ve dated craptons of stupid 22-year-old boys and none of them ever has ever once ever been good at keeping plans.

So I should know better.

But this boy is driving me insane!

I WANT TO KNOW THOSE THINGS.

He’s carefree, and  go with the flow and “whatever man”

I like it because I find myself watching “Four Christmases” on his couch while he jumps next to me and then grabs my hand and a suddenly a crappy movie is the best movie I’ve ever seen.

And I find myself wearing his favorite Cubs sweatshirt and having Saturday afternoon lunch together at a very dim and very intimate TGI Friday’s while the rest of the world is running errands and then walking through Best Buy hand-in-hand on a whim and thinking about how much I love spending time with him.

And I find myself smiling all the time.

Those are the kinds of things you can’t plan.

But this weekend, I wish, just maybe, we could set a time for dinner.

My friend Diana is the kind of gal who loves steak, arranges her schedule on Ash Wednesday so she can go to noon Mass, and who follows the news so closely that when I get a breaking CNN text alert, she already heard about whatever happened 10 minutes ago.

And she’s become one of my closest friends since I met her about a year and a half ago.

Which is why I couldn’t possibly be more happy that yesterday she got married to the love of her life – Chuck.

I have never in my life seen a bride so genuinely happy.

And her now-husband was beaming so much that I thought sunshine might start coming out of his teeth.

The setting was intimate, the vows were genuine and  polka dancing was fun to watch. And I learned a valuable lesson about the expiration date of the electric slide.

I don’t even mind that multiple members of the Mariachi band asked to take cell phone pictures with me. My Spanish is rusty, but I can only assume they either thought I was pretty or that I had toilet paper sticking out of my nylons and nobody wanted to tell me.

I wish both Diana and Chuck a home that’s dripping with blessings, a life filled with more happy times than bad and a love that really does make the two of you become one.

– I know it’s grainy, but I was in the back because I got there a tad late (Sorry Diana). I LOVE how Chuck is smiling here though. He looked like that pretty much the whole day. True story. 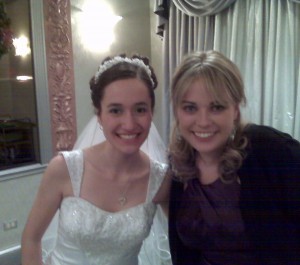 – Diana and I. And yes, that smile was on her face right down the end when the banquet hall staff were starting to clean up.