Editor’s note: This post is about the decision making process I went through regarding the possibility of going on a long-term mission trip. However, I have decided NOT to go (you’ll read why) so don’t read the first line and then freak out. Thanks.

What I’m really worried about is that I wanted to go on an 11-month mission trip:

A. To prove to God how much of an amazing Christian I am.

B. To escape the extremely difficult work that is church building.

C. To leave behind all the things I think are stupid, such as: high rent, high car payments, and high student loans.

D. To seek out God’s presence because I don’t think it’s possible to feel it in a country as (relatively, compared-to-almost-every-other-country) rich as America.

To catch up everyone who isn’t my mom, my pastor or my spiritual mentor, I have been considering going on an 11-month mission trip that would take me to 11 countries.

And by considering, I mean, I applied and was accepted and have had about two weeks to decide.

Life choices are rough though man.

To get a few frequently asked questions out of the way:

1. No I would not get paid. Yes I would have to pay them.

2. $15,500 is the base cost of the trip, but I would also have to raise money to cover my health insurance and a couple other things while I was away.

All of that sounds incredibly amazing, doesn’t it?!

I seriously have a heart for mission work. Seriously. It’s tangible and awesome and you get to see the impact you’re having as soon as the paint dries on the house you helped fix. You get to live on cheap food, and be surrounded by the extreme presence of the Holy Spirit. You get to shower only when you’re lucky. And you get to grow really close to God. LOVE IT!

And, I keep thinking of the story in the Gospels where Jesus is asked by a man what is needed to enter the kingdom of God, and Jesus says that all he has to do is give up all his possessions, but the man just can’t bring himself to sacrifice so much, so he just walks away.

And I’m not going to lie, there is a really big part of me that’s just downright, legitimately really, really, really scared about the idea of raising $15,500, going to 11 very poor countries and leaving behind everyone I love. And, if fear is what’s holding me back, then I should jump on the plane tomorrow.

But I’m also mostly really, really worried about A on that list up there.

It’s taken a long, hard look at myself to figure that out. I like to be the best at things I’m passionate about because I secretly never think I’m good enough and I desperately want validation.

So you see, I have this pattern. I want to give it my all all the time. And I think there’s a part of my soul that feels like giving my all to Christ means I have to literally leave everything I love and go around the world and do my very best to save everyone ever. Except, you know, that’s not right at all.

I mean, God knows I’m a good Christian. God knows that I want to give Him my all. And doing youth work ain’t nothing.

And, really just shut up Crystal brain! Even that’s not right.

God is just an endless bucket of grace so I should just stop trying to impress Him. I should just accept His love and stop striving to accomplish the impossible task of earning it.

Although I knew all that, it really, really hit me while I was looking through blog posts about (ironically?) the mission trip and stumbled on this site: http://nealmontgomery.wordpress.com/

Neal (I’m assuming “Neal” based on the url) has a post about the potential to turn Godly things into idols. And, there’s this line at the bottom of the post that hit my soul. Deep.

“He wants us to live solely for Him, and trust that nothing we can do will make us more worthy of His great love.”

And I realized that was exactly what I was striving to do — be more worthy by going on an extreme mission trip.

Sure, there are a lot of (relatively, compared-to-almost-every-other-country) rich people here, and most of them don’t need me to supply rice and beans for them to eat, but they are also so hungry for spiritual food and tons of love that it’s kind of nuts. And I can serve them those things any day of the week and twice on Sundays.

Just because we’re in a first-world country, doesn’t mean there isn’t work to be done. Work that I can be called to.

So I’m going to say “no” to the trip and stick it out here for a little while longer. Maybe build a church or something, God willing. And then, if The Big Guy has it in His plans for me to do world-wide mission work, I’m sure He’ll figure something out later on.

For now though, I’ve come to realize that God has blessed me with a sincere chance to do His work right here.

(I have to write about the Bears because I can’t post about all the other stuff I’m dealing with right now).

Seriously! Go BEARS! I love you guys! You can totally beat the stupid Packers. I predict 27-24 Bears in a nail bitter that Gould wins for us. Also, I’m kind of hoping Aaron Rodgers gets sacked like 50 times. In a nice Christian sorta way, but still.

(All my stress has to do with life choices, and oh dear, I fear I’ve already said too much).

My favorite part about the Bears’ games is that it’s a chance to hang out with friends and family and bond and eat and fellowship. I also love that they give me a chance to wear navy blue because that color totally brings out my eyes.

Really, the games are a perfect escape. A chance to let out some anger in a way that doesn’t actually hurt anyone. A chance to get really emotionally involved in something that has little actual impact on my life. A chance to just zone out during commercial breaks.

I used the think it was stupid for people to care so much about something that doesn’t actually matter, but now I understand — that is exactly the point of football games. You get to completely envelop yourself in something where the outcome is non-consequential, unrelated to any of your own efforts and super fun. It’s really freeing, in a weird sports way.

So ya, for sure, Go Bears Go! I sincerely hope you win. But in the meantime, the game itself will be just the escape I need.

Now that’s what I’m talking about folks! The Bears are back and they aren’t going to let anyone go for any sort of two-point conversion in OUR HOUSE.

What’s that Falcons? You think can pass the ball down the field? Ha. Funny. Not going to happen. Bears defense is your worst enemy.

Best part of the game was when the Falcons fumbled and the pile of players were all going for the ball like it was a Super Bowl ring right there on the field, and then one of the Bears players still standing up,  grabbed a Falcon players’ leg and tried to pull him out, and then the Falcon payer, who’s head was under the pile, kind of kicked in the air, like, WHAT THE WHAT?

Bears ball. And we will literally pull you out of the pile by your legs if that’s what it takes.

I think this could be THE year folks! Defense? Still awesome. Special Teams? Still have Robbie Gould. Offense? I think the 30 points should shut everyone up.

Heck, Jay barely even pouted. If he can go with that all season, we’ll be bleepin’ golden.

The whole game day experience was that much sweeter because last week I actually saw everything live. I went to my first game, and it was preseason and whatnot, but it was still seriously awesome. (Thanks to Eric Jensen and the youth group for the best birthday gift ever!)

My brother and I had seats in the second-to-top row, and ya, we had to climb a small mountain and then scale a castle to get up there, but you could still see every player and coach and mascot clear as day.

And I loved singing “BEAR DOWN! CHICAGO BEARS! YOU’RE THE PRIDE AND JOY OF ILLINOIS!” every time they scored while the rest of the world went to commercial.

Yesterday, I spent too much time looking at the TV and wondering where exactly my seat was, but I also had a whole different feel for the coverage after seeing it all in person. I also gained a stronger appreciation of the magical yellow lines the networks use. Those things rock. How the heck did anyone every know where the first downs were before they were invented?

It’s a good time to be a Bears fan folks. A good time. Now excuse me while I obsessively listen to ESPN radio in my car so I can repeatedly hear them talk about how awesome the Bears were yesterday.

I leave you with my pictures from the preseason game. Enjoy and whatnot. 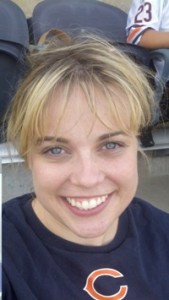 Even at Bears’ games I take pictures of myself. And even at a Bears game my eyes look drunk when as sober as a Methodist pastor on Easter. 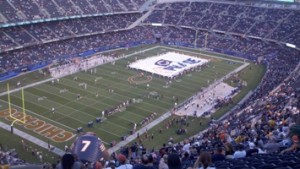 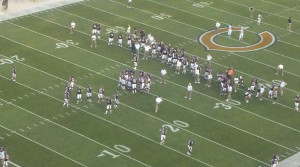