My little sister Monica is pretty much the most amazing thing in the entire Continental United States.

When she plays volleyball images of the Olympics flash through your brain, when she writes a paper, you wonder how she is yet to be published and when you see her beautiful pencil-tight curls in a photo, you start to think maybe she can live out her dream of being “a dancer, a model or a singer.”

She also loves God like a rock star, can help you plan a party or a youth group event like a professional and navigates better than Google Maps.

Plus, she laughs at pretty much all my jokes.

But I  have to say, I have never been more proud of her than when I found out what happened at her school’s mock election.

Apparently, she was chatting with a friend, and the two of them were holding full ballots for the presidential race as well as the local races and her friend was all, “I don’t know hot to fill this out.”

And Monica was all, “It’s easy, just mark all the ones with a “D” next to their name.”

It makes me want to cry tears of joy. Someone done raised her well. 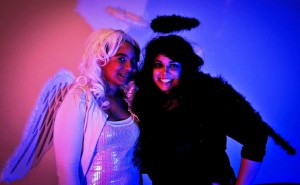 Live, on a local NBC station that featured zero insta-polls or commentary across any part of the screen. I didn’t check Twitter for live updates, I didn’t check Slate or Time for live blogging. I just watched it. With my brother. In my living room.

I’d like to think I’m a little smart, that I follow this stuff enough to know what they’re talking about when they say things like, “Simpson-Bowles”  and so,  I wanted to see how I would view the debate without any help from other people’s opinions.

And, for me, at least, I really thought Obama won.

The whole world says I’m wrong though apparently. And I guess it could just be my typical political leanings talking. But at the end of the debate, the guy I wanted to be my president was Obama.

Personally, I’d like the guy who calmly, thoughtfully replies to the issues. The guy who says things that add up, the guy who’s cool under pressure, the guy who seems to understand basic math. Because as far as I can tell, being president is pretty stressful and complicated and difficult.

Romeny seemed to be speaking in cliches, saying he was going to magically make it so we don’t have to raise taxes AND we can still spend as much money as we want on education, medicare, and the military without raising the deficit.

He said cutting taxes for the rich was going to create jobs. Umm, we kind of tried that. It didn’t work.

He accused Obama of not working with Republicans. WHO WON’T WORK WITH HIM.

Then, the dude literally said he was going to stop funding Big Bird.

While in a debate with a host from PBS.

And then he said he’d cut funding for the host.

Who was SITTING RIGHT IN FRONT OF HIM!

My brother was like, “If I was Jim Lehrer I would have stood up right then, turned to the crowd and been like, ‘All right, you guys can boo now. This guy is a tool.'”

And this whole business of Romney trying to pretend that Obamacare is not entirely based on Romenycare is maddening.

If you only take one thing away from this post, let it be that.

Obamacare IS Romenycare. And anything to the contrary is total crap. If you don’t like it, if you like it, either way, they are one in the same. And the fact that Romney is trying to pretend that it isn’t is probably the most blatant example of his willingness to say whatever the heck he needs to say to get what he wants whether he believes it or not.

Oh sure, Romney says the states should just decide that stuff, so it’s technically different. For the sake of argument, let’s pretend that’s a real thing. Umm, have you seen how Illinois runs things these days? We can’t even manage to keep our state parks open on a regular basis and he wants them to be in charge of my health care?

Romney just seemed like he was naive, like he didn’t understand the reality of the situation and as though he would just say whatever he needed to say in whatever situation he was in to close the sale.

So, I guess if winning the debate means being more aggressive, having more zingers, and telling more lies, then I, personally, will be voting for the guy who lost.

If you saw me Wednesday morning, you probably had no idea I’d only gotten 3.5 hours of sleep.

It’s a trick I credit to amazing under-eye concealer and being stupid enough to make my mind think I got a solid four hours. Boo-ya.

I wish I could tell you I had no sleep because something amazing happened. Like I won the lottery and immediately went to a 24-hour Target to buy seven pairs of pants that actually fit me. Or that my vegan friend from California randomly showed up at my door and we talked for hours because he’s awesome. Or that Taco Bell told me I could have free burritos for life and so I spent the whole night making sure it was applicable at every single Taco Bell in the greater Chicagoland region.

But no. The reason I had no sleep is a stupid jerkface we’ll call, Tennis Player.

(He said he’s read my blog, but I’m thinking he doesn’t really do that now, seeing as how he’s a stupid jerkface and whatnot, so I’m just going to go ahead and give him an easily identifiable nickname. I’ll give him the benefit of not using his actual name for now though).

Then, somewhere along the way (10:30 p.m.), Tennis Player thought he should tell me that he’s still in love with his ex (minus a million points).

Not like, ‘Oh, I just still kinda like her’ love. No. No. This was more, ‘I love her and so I can’t even bring myself to kiss you because I just love her so freaking much. Puke.’ love.

I mean, I was totally pulling for this guy since the moment I met him. He was cute and mostly smart and he voted for the same person I did in the general election and he was able to have conversations that make you wonder where the last hour of your life went (in a good way).

Also, it was kind of endearing the way he tried to dance even though he wasn’t very good.

Alas, it was not meant to be.

After a craptastically-awkward good-bye hug, I went to my car and I cried.

My secret plan had been to spend the night at Tennis Player’s house, but seeing as how I might interfere with his plans to woe back his stupid ex (who isn’t even in town and doesn’t even have the decency to date him anymore) (ya, I’m a little bitter), I figured I should just book-it the frick out of there.

While wallowing in my own self-pity, I checked my phone, secretly hoping Tennis Player sent some sort of text telling me he’d just realized how amazing I am and that he wanted me to come back inside. (He didn’t).

Luckily, I found something better – my friend had e-mailed me minutes earlier, all, ‘How’s the date going?’

My friend. Who is awesome, and sweet and empathetic and lives like three minutes from Tennis Player. Who somehow knew I needed her right then.

Because she is awesome, and sweet, and empathetic, she let me come over and sleep on her couch. When I got there, I was planning to cry, but instead, I went another direction – hopelessness.

And how I feel like I’m in a place where I’m really truly happy with myself – with my mind, body and soul – but so many of the men I meet are sitting around hoping the life-fairy will come around and fix them.

And how I just want a guy who makes me laugh, and loves my blog and the Bears and Taco Bell. A guy who’s driven, and Christian and smart. Who watches the Daily Show and Mad Men and CNN. Who can hold a conversation and then kiss me with authority. Who lends me his coat when I’m cold, and returns my phone calls.

A guy who’s a lot harder to find than I thought he would be.

I’m told she’s since been happily married to a man who is most definitely ‘The one.’

I guess if she can wait, I can too.

And really, I think we all know that Tennis Player was fine. But he was nowhere near, ‘The one.’