Hey there, it has been a hot minute hasn’t it.

Sorry about that folks. It’s been a long hot minute for me though yo, and so for the next two maybe twenty sentences, I just really, really want to throw a pity party for myself. If you aren’t interested in such activities feel free to skip the following three paragraphs.

So, I’m just really, really tired, and I’m broke, and a couple weeks ago I led the youth mission trip for my church, and anyone who’s ever led anything involving 12 teenagers, two vans, 5 hours of sleep a night and one bathroom for 38 girls plus adults, will tell you that it is the single most exhausting thing ever (aside from, I’m assuming, giving birth). It’s also super rewarding and life changing and awesome and more worth it than anything (again, aside from, I’m assuming giving birth), but you just come back feeling like you’ve been wondering around the dessert for 40 days. 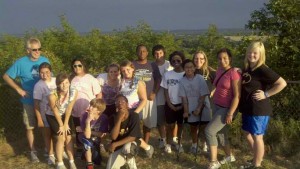 (Lookout Mountain, which was more of a hill at the top of its game).

Then, as soon as I got home I tried to dive right back into life, but my body was like OH NO YOU DIDN’T, and I got really sick, and had to take more time off work. Then last week I ran Vacation Bible School, and it too was awesome but also exhausting, and then on Thursday, I totaled my car when I rear-ended someone on I-294 just north of the O’Hare Oasis, and I cried a lot, and the stupid state trooper gave me a $120 ticket because he sucks at life, and then while I waited for the tow truck I had to pee super, super bad, but couldn’t and then debated just using a taco bell cup in my car but didn’t and then I prayed really hard, and finally the tow man arrived and took me to a McDonald’s bathroom. 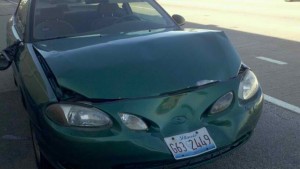 (For the three of you who haven’t already seen this on my Facebook, this is the “after”).

And then, I had to car shop, which basically, sucks. I’m pretty sure the dealer I went to is shadier than a willow tree, but he gave me Oxycontin or something so I feel in love with a 2006 Toyota Camry that has leather seats and the prettiest black paint you ever saw. And now everyone is trying to tell me to be happy about getting a new car, but really I’m just sad that I had to sign my life/soul away for the next six years for a sunroof and a car that doesn’t require any duck tape. 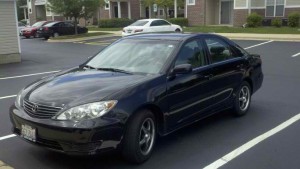 So in conclusion, the mission trip rocked, being sick was my body’s way of screaming, CALM THE CRAP DOWN, Vacation Bible School leaves Christian ear worms in your brain all day, so that you wake up singing “Boom Chicka Boom”, I love my new car/hate my new car payment, and I’m going to hit the pillow early tonight for sure.

2 Comments on A long hot minute