So, the 5k race not only did not suck, it was also kind of awesome.

My goal was to finish in less than 45 minutes, because that’s where I’ve been at in my training runs (Ya, that’s right, I use cool phrases like “training runs” now). But then, the adrenalin was totally real, and my pace was jacked because there was like 200 other runners, so I ended up finishing the first mile in 12 minutes (see: miracle). And then, by the second mile, I was at 27 min.

And then, the last mile wasn’t even that awful. Mostly, I’m guessing, because two of the other runners from my group came back to run with me across the finish line, which was seriously the most awesome thing ever. And ya, a little bit of throw up came up my throat when I finished, but holla! I FINISHED!!! IN 42 MINUTES!!!

It was seriously so fun. And one of the guys in our group said I was glowing afterward, and he wasn’t even just referring to all the sweat.

Aside from not dying, I’d say the coolest part was at the 1.5 mile mark, where the volunteers handed us cups of water and then we drank them while we ran and then we threw the cups down on the street. That’s totally something real runners do on TV!

Anyway, my goal for next time is to finish in less than 40 minutes. And ya, that’s right, I said “next time.”

Not only was it all super fun, but the people in my little church run/walk group are so awesome to hang out with, that they’re addicting even without the adrenalin.

They cheer me on, and run slow with me during training (well, I run, they sometimes speed walk next to me). And they always say “GOOD JOB!” like they really mean it.

One of the guys even told me today that I’ve gone from “jogger” to “runner” to “racer” now. He was probably just being nice, but I’m just going to go ahead and pretend like he was serious, because it made me feel really happy on the inside.

I hear there’s some sort of Thanksgiving Day race, where runners dress up as Turkeys. Sign me up, YO! 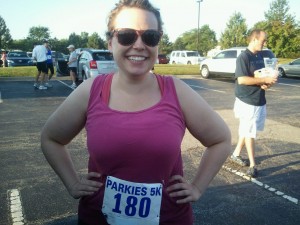 Wearing the number on my shirt, made everything very official. This was the “before.” 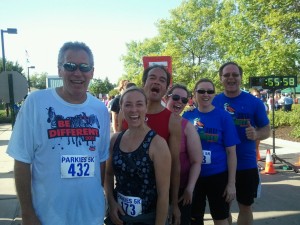 This was our whole little church group in the “after,” and that’s me BEAMING from the back. I think I was thinking “I LIVED!!”

1 Comment on I’m officially a “racer”: My first 5k