The only certainty is bad grammar > humor > The story of how I met Hugh MacLeod and he SIGNED MY BOOK!

The story of how I met Hugh MacLeod and he SIGNED MY BOOK!

The author Hugh MacLeod became my hero. The man made me want to be a better person, with his awesome advice such as “Never try to sell a meteor to a dinosaur. it wastes your time and annoys the dinosaur.” AND  “Quality isn’t job number one. Being totally f*cking amazing is job number one.” (except he didn’t use a star in the F-word, like I did – he’s a little bit cooler than me).

yesterday I was doing my daily facebook stalk of his profile, when I saw this magical, amazing, wonderful post:

holy crap. I LIVE by chicago! I could totally go to that!!

for about three seconds, I worried about imposing on some sort of close-door meeting meant only for his real-life friends, so I Facebook-ed him to be sure it was an open invitation.

Sure, come along! See you there 🙂

I pulled out the dangling silver earrings, a lovely purple top and greet heels.

All I needed was my voice. Not like, my “writer’s voice.” My actual real voice.

Laryngitis had left me sounding like a bar whore who’d been living on a pack a day for 43 years while also regularly attending rock concerts. I was scratchy and squeaky and awful. I drank hot tea, refused to talk to anyone all afternoon and hoped for the best.

When I arrived, I squeaked out a “heeeloo.”

Everyone assured me that I sounded like a jazz singer, which helped (ish) but even still, I kept pretty quiet and mostly just looked around in wonder and amazement, while everyone told WAY cooler stories than anything I could come up with.

And anyway, my secret plan really was just to get  Hugh to sign my book. I didn’t want to look crazy though, so when I came in, I hid it in my coat. (I’m sure the large square-shaped thing in my pocket was TOTALLY sly).

After about an hour,  I worked up the nerve to ask his business manager if I’d be weird to ask for an autograph. He gave me the “you’re such a silly little girl. yes you are. oh yes you are”  look, and said “It’d be fine.”

Not only did Hugh sign it though, he also drew a picture! (this is exciting because he’s a cartoonist).

I’m pretty sure he just got a new fan for life.

Just in case you think I’m making the whole thing up, here’s proof that I really am cool. It’s a picture of Hugh holding the book he signed for me (you can see how it would be hard to fit in a coat pocket): 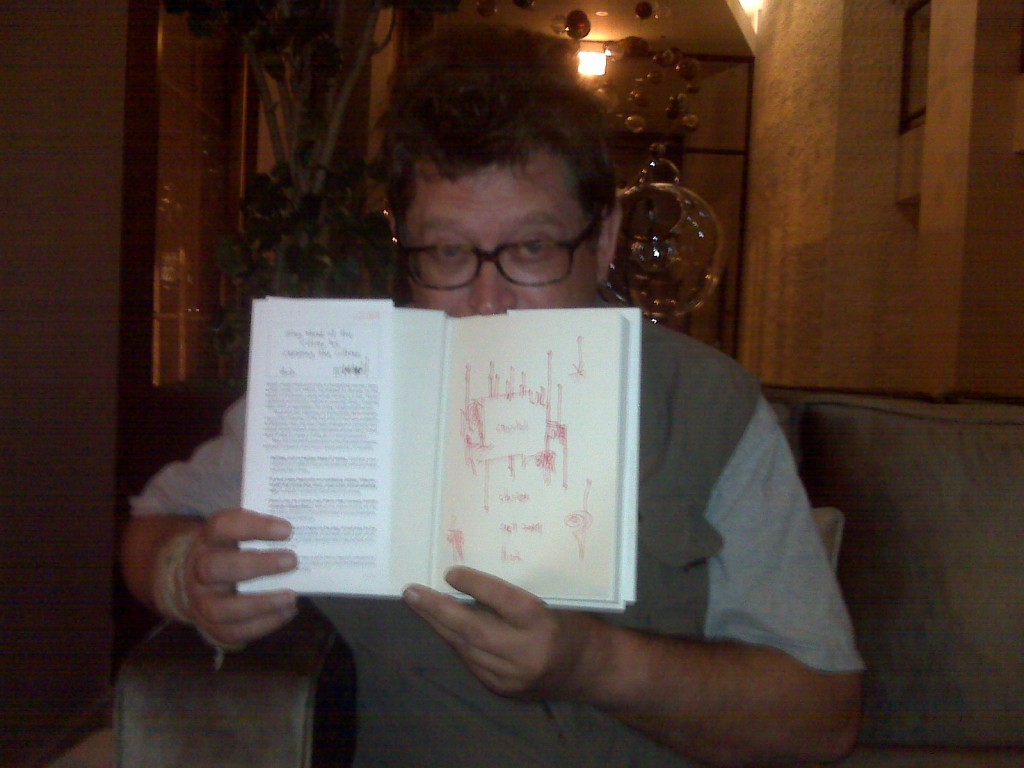