Remember when I wrote this last year?

But heck, I thought it was so fun that I’m doing it again. Plus it gives me a great opportunity to link to some of my favorite posts.

Without further ado, let’s have a look at 2009. (P.S. credit where credit’s due – I actually stole this from Mandy last year before stealing it from myself this year).

2. Did you keep your new year’s resolutions, and will you make more for next year?

Well I lost a bunch of weight, but that was more of an August Year’s resolution. I guess I’d like to lose 12 more pounds, and maybe stop waiting 6,ooo (fine, 10,000) miles between oil changes.

3. Did anyone close to you give birth?

No. Unless you count Dooce, who I feel close to and once met. AND! My friend Justin had a baby! YAY!

4. Did anyone close to you die?

My friend Dionate died, and a little 2 year old boy I wrote a story about also passed away as unexpectedly as someone with a tumor can.

5. What countries did you visit?

Enough money to pay all my bills every month.

7. What dates from 2009 will remain etched upon your memory, and why?

8. What was your biggest achievement of the year?

9. What was your biggest failure?

I went through a toll in August without paying because I didn’t have cash. I planned to pay it in 7 days, but then I forgot. Then, they sent me a fine for $62 dollars, but I have yet to have an extra $62 laying around. Then, I got another notice, which I didn’t even open because I suck at life, and I’m pretty sure I now owe the state of Illinois $212. For one toll.

10. Did you suffer illness or injury?

The gall bladder surgery was Jan. 8, so that technically falls in 2009. Also, I sprained my ankle craptastically. Both sucked, if you’re wondering.

11. What was the best thing you bought?

My laptop. I love it like a child. Kinda. For real.

My friend Diana got married, which resulted in one pretty fun party complete with a mariachi band.

13. Whose behavior made you appalled and depressed?

I said “the Bears” last year, and alas, they somehow managed to be even WORSE this year.

Getting my ears pierced, meeting Dooce and Johnny Knox and seeing 153 on the doctor’s scale.

“Tick Tock” by Kesha. And, “She’s Got Whatever It Is” by Zac Brown Band. (Thank me later for linking to those two).

17. Compared to this time last year, are you:

a) happier or sadder? Happier

b) thinner or fatter? Thinner

I want to say blogging but that sounds like a lame to write on a blog. How about, sleep.

20. How did you spend Christmas?

Started with an 11 p.m. Christmas Eve service complete with candlelight, then opening presents with my brothers, sister and mom, then Sandy and Glen’s with twice baked potatoes, then April’s family’s house with homemade chocolates.

22. What was your favorite TV program?

Mad Men and Desperate Housewives. Also, I love “Say Yes to the Dress” (but don’t tell anyone).

23. Do you hate anyone now that you didn’t hate this time last year?

25. What was your greatest musical discovery?

A laptop, to lose weight and to lead the high school youth group.

Can I say a boyfriend, or would that make me seem pathetic?

28. What was your favorite film of this year?

I liked Avatar (in 3D) (Someday, when we watch movies in our dreams, I will look back and think how simplistic this movie was, won’t I?)

29. What did you do on your birthday, and how old were you?

I turned 26. That’s almost late 20s. Lame. I went to Olive Garden with family. That’s the opposite of lame.

30. What one thing would have made your year immeasurably more satisfying?

More money. (But don’t tell God. He tends to frown on that).

31. How would you describe your personal fashion concept in 2008?

Whatever fits, which at first was just clothes from college, but then, as I lost more weight, was clothes from high school, and now, ya, it’s actually nothing, so I just wear too-big pants everyday.

33. Which celebrity/public figure did you fancy the most?

34. What political issue stirred you the most?

All my friends I’ve made all over the freaking country who I mostly only see on Facebook.

36. Who was the best new person you met?

Wow, I cannot think of one person I met this year who has since become a friend. Note to self: Make more new friends.

Spraining your ankles sucks so don’t work out if you’re too tired to focus on how your feet land, putting vitamins in an old prescription bottle so you can store them in your purse totally helps them not leak their icky vitamin smell all over your keys and wallet, and, that sometimes people change for the better, but most of the time they don’t.

38. Quote a song lyric that sums up your year.

“God is great, beer is good, and people are crazy.”

They either don’t realize I look different, or they don’t know how to say “Hey, Crystal. Your face looks way thinner.” without sounding awkward.

The holidays have been a pretty startling check-in point for me. Lots of people around whom I haven’t seen in about 20 or 30 or 43 pounds. Lots of “WOAH! You look GREAT!” and “How’d you do it?”

I keep teetering between blurting out every ounce of detail and simply smiling away their questions. Does anyone really want to know what I’ve gone through to lose each and every pound?

I want to tell them. But I don’t really think they want to know. I think they want to pretend people lose 43 pounds eating five small meals a day with appropriate servings of fruits and vegetables and 30 minutes of wonderful glow-inducing cardio.

I don’t know those people.

I didn’t lose weight that way.

I lost weight by making my body so hungry that it started eating away at my fat.

It’s called the “that’s how you actually lose weight” diet.

It’s not pretty. I’m never full. I weigh myself two to seven times each day. And I’ve been at this for four long months – all so I could fit into the correct box on the chart at my doctor’s office.

I’m just 14 little pounds away from my overall goal now – I’m still not AT my goal, but I’m so close I could smile.

I wanted to wait until I hit that goal to throw the ITs out there though.

My weights and measures.

What I started with. What I’m at.

My best friend April has been the only one I’ve discussed those numbers with on a regular basis and that’s only because I trust her to be my friend no matter what those numbers are. It’s a trust she’s earned by sticking out 11 years worth of confessions, clothing sizes, and crying sessions as my friend.

But now, the losing-weight-thing has hit an ankle-based roadblock and the figures are moving so, so, so slowly. And really, I’m actually very, very happy to be where I’m at.

I kind of want to shout it from the Internet rooftops.

I’m very, very happy to walk into a room and think ‘I look normal.’ I probably don’t, but I feel like I do. I know that, at the very least, I don’t feel like someone is thinking “Wow. She’s umm, fat. That’s why she’s (fill in the blank with any number of human failures or ailments).”

Instead, at this weight, I feel like people think “Look. A normal girl. Let me listen to what she is saying.”

And since I’m so happy/content/tickled to be where I’m at, I thinking I’m going to just go ahead and throw it out there.

I don’t know what you’ll say when you see those easy-to-judge little numbers.

The weirdest part of this is that I never actually felt “huge” or “fat” or whatever you want to call it. I felt like “Crystal.” It was the scale that was all judgmental. The chart at the doctor’s office that screamed “SOMETHING IS WRONG WITH YOU.”

I just still feel like “Crystal.” Still (mostly) funny. Still wearing my heart right there on the edge of my cardigan sleeve. Still trying my best to make a living as a writer.

Why do you think that’s an OK thing? Do you think I’m different now? Am I more deserving of financial success, marriage or friends because I weigh less? I think I’m the same deserving level as I was on July 31, before I lost a single pound.

I guess, in the spirit of that conclusion though, I should just do it.

Just BAM! Type those stupid numbers that are burned in my mind.

They don’t change one sliver of the bottle of spirit and soul and Taco Bell magic that makes “me,” “Crystal” after all.

I’ll be totally happy if I don’t ever lose even one more single pound ever.

I’ll be totally “me” no matter what I type at the end of those three sentences, ever.

Anyway, in complete opposition to every sentence I just typed, I present to you some visual aids: 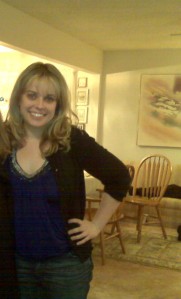 I realize this isn’t the fairest “after” picture, since I’m kind of behind my mom on the left, but it was either A. this, B. a head shot I took of myself last week or C. a random picture taken right now at 3:30 a.m. of me in my super mario pajama pants and glasses.

I picked A. this.

If you want to see a full version, call me, make plans and come visit – I’ll even wear my skinny jeans that are now, umm, too big for me.

It’s basically been snowing here for about 17 years.

It makes want to huddle up inside surrounded by blankets, dvds and my laptop. Luckily, I’m currently under the favor of the scheduling universe and I don’t have to work until Wednesday, so that’s pretty much what I’m doing.

The last day or so was super-wonder-fan-tabulous,  but I overdosed on cookie-eating, caroling and candy-cane-hanging.