But. Well. See. Last night, I was watching Desperate Housewives while eating a piece of my $5 hot-and-ready pizza from Little Caesars, and I started to see some upsides. I figured I should write them down so I can read though it the next time I’m living for a week on Ramen Noodles.

5. Tons, and tons and tons of story ideas.

I’ve written about 7,493 stories for work that somehow related to the horrid economy. And my fellow reporters have done the same. Want to know how the recession effected napkin sales, or obesity, or both? We probably did a front-pager on all three.

With that many articles, it’s hard not end up with some really good stuff, like the series of vignettes I wrote about the unemployed, and the great articles about failing city developments and pieces on school districts cutting everything but math and water fountains. Really fun to dig into and share with the world.

UMM, $5 for a hot-and-ready pizza. FIVE DOLLARS! That is just insane. Amazing. A whole freaking pizza for $5! AND, Six Flags season passes are on sale for $64.99. For a SEASON PASS! As in, it’s good for the WHOLE SEASON.

I can buy all my clothes on clearance for less than $8 at even the expensive places, like Gap. Cricket offers unlimited everything plus one for cell phones for $25 a month. Subway sells foot-long sandwiches for $5. Houses sell for $3 (ish). And GoogleVoice is FREE!!!

It’s great. I love it. I mean, sure, the prices are low because nobody has any money, but it’s still exciting.

3. My job is no longer my top priority.

When my whole life centered on my career, I had to be the best all the time everyday no matter what, because if I wasn’t then suddenly all the sacrifice wasn’t worth it. But then, the recession came and pummeled my industry. Suddenly, being the best didn’t even matter. There were no raises, no promotions, no job prospects. Being the best at my job turned into the equivalent of being the best at Facebook’s Farmville – nobody cared.

I still work hard, and I will never, ever reach a point where an article with my name on it isn’t the best it could be. But I don’t feel so bad about leaving, say, ON TIME, or saying “No” to an assignment.

And with that, comes a freedom to have a life.

I had been trying to lose weight since the day before forever, but it was never at the top of my to-do list. The top half of that list included things such as: Find a new job. Move to where new job is. Repeat.

But then, the recession came and killed all the new jobs, so I had to go down to the second half of my list. And there it was. “Lose weight.”

Being in the same place, with a steady life and access to a steady stream of exercise and food choices did a lot to help me meet that goal. And I’m really happy I did.

It is possible to have a strong relationship with God when you move to a new church every six to eight months, but it’s possible like me fitting into size 2 jeans is possible or the Cubs winning a World Series this year is possible.

My newfound steady living situation helped me to really get involved with my church on a level I never would have imagined when I was moving at both the beginning and end of every football season. I’m leading the youth group, attending fundraising events, and really connecting during praise and worship services.

And, well, when you have $4 to last the week, it’s hard NOT to turn to God for help. But, later, when money magically appears from some random source, it’s hard not to say thanks to the big man then too.

By using God as my crutch, he somehow turned into my friend. Seems like a little economic downturn is a small price to pay for all that. 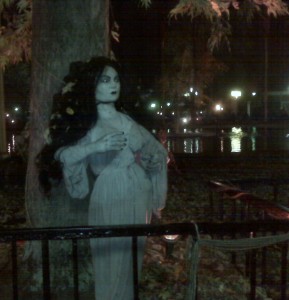 I would like the official record of all records to show that I TOLD THEM I was scared of haunted things.

I clearly explained to my two friends that I don’t watch scary movies. ever. that I haven’t been in a haunted house in at least 12 years. and that I DON’T LIKE WALKING DEAD PEOPLE.

whatever it was, a few hours into our trip to Fright Fest, I was walking through a haunted trail. The kind of trail that you wouldn’t think would be very scary in the broad freaking daylight we walked through it in. The kind of trail that’s supposedly so un-scary that it’s not even the main attraction. No, it LEADS to the main attraction – a $10 per person haunted house. (you can bet your sister’s trick-or-treat  candy I didn’t go in that crap)

Ok. Sorry. I’m back. All right, let’s start with the people dressed as bushes.

They flipping jump out of nowhere in a way that should be illegal. One’s sitting on the side all “look at me. You can see me. I can’t scare you. I’m a nice man-bush.” and then.

another man-bush on the right jumps out of freaking nowhere. literally. he uses a nowhere-appearing device and then jumps.

Luckily, the people behind me were well aware of this though, because I kindly screamed louder than a bullhorn to alert them.

Call it the Christian in me. I don’t know. I guess I’m just nice like that.

There are people dressed as murderers who follow you around.

Well, mostly they just followed me around.

And one of my friends actually said, “Crystal, the more you freak out, the more they are going to bother you.”

And I was all “Umm, kind sir, I’m pretty sure we left logic and common sense on the ground back at the man-bushes, so just GET ME OUT OF HERE!”

At one point a woman with a frying pan that may or may not have been inserted into some of her organs realized that I was freaked the F out and started following us. And I swear to Halloween that I panicked so bad that I don’t have a full memory of what I’m told I did next.

I thought that I kindly walked past a crowd of people and ran for my life.

Apparently though, I barged into a random couple, pushed the girl away with strength usually reserved for lifting mattresses and then grabbed the guy’s arm for protection.

In my defense, I kind of thought I was about to be killed by a bloody frying pan.

The random girl was not so much sympathetic though. And umm, I do kinda remember looking back at people as I ran away and wondering why they were giving me looks of damnation, when I had clearly just saved myself from an impending death and warned them of theirs.

the stupid frying pan murderer pointed me out to her stupid murderer friends.

SHE POINTED ME OUT!

How the crap am I supposed to live through this trail when they are conspiring against me?

There was the random olden-time girl who, I swear to you, came up and whispered “I want to kill you.”

what the crap? This is a FAMILY attraction.

Then, I had to get past the man who passive aggressively explained that he wanted to cut off my head and then use my hair for some sort of wig.

When I finally made it out alive, I promise you I was sweating like someone in a sauna, and my heart was beating faster than vertical velocity and I couldn’t breathe.

and HOLY CRAP THAT WAS SCARY.

alas, my tale doesn’t end there. No. they had stupid scary clowns just walking around scaring people near the Batman ride at night.

And I would have jumped behind the food counter if I’d had to in an effort to get away from those clowns. I am not even lying one single ounce.

Calm. Deep breathe crystal. It’s all going to be all right now.

Basically, I’m saying that all that crap you hear about facing your fears and taking a leap is just that.

Panic attacks are just not worth it.

Unless of course, I’m trying to convince you to go on a roller coaster. Because if you’re scared of that, I’ll likely have to call you a lame-0 loser behind your back.

if you’re going to go around picturing my little brother, just take everything you know about me and then move to opposite land (it’s right next to Colbert Nation).

don’t misunderstand, i love him deep-down crazy style. we come from the same twisted homelife, and he’s one of just a few people in the world who can ever know my very core.

but because we are not alike in any practical way, we’ve been through some shyte.

some throwdown, knock down, crying, yelling, I HATE YOU AND HOPE YOU DIE! shyte. the kind of shyte only a brother and sister can experience. and even then, only if they love each other. the kind of shyte that’s led us to not talk for umm, oh, i’d say about the last two years.

except of course, at great america.

at great america, we’re the same.

we ride in the front seat of vertical velocity. we pressure people into going on rides even if they’d rather live in a freezer for seven days than experience them. we even hate the same people – those stupid losers who use the flash pass to cut in line.

and because really, i love him deep-down crazy style, i eat it up.

instead, i considered it.

the ride is basically a drop to your death that stops just short of landing you in a casket.

you hook up to some wires and then, while linking arms with your partner, are jerked up about 10 stories high. after a quick confirmation from the people safely on the ground telling you it’s time to FLYYYY!!, you have to pull the rip cord so you can drop to the cement.

did you hear me?

YOU HAVE TO PULL YOUR OWN RIP CORD!

let’s be honest, my brother was in charge of that crap. if it were up to me, i’d just make a nice little house up there complete with a loofah and live in it forever because WHY WOULD I FLING MY OWNSELF TO DEATH?

but on this ride. he was scared. actually, he was terrified.

while looking down at the cement they had lifted us over, building up to the official “rip cord moment” we examined the little tiny trees,  held our breath and tried not to pee right there from 150 feet above the ground.

then, he said to me “why the (swear word) do i have to be the one to pull the (swearing word) rip cord?!” with a panic in his voice i didn’t know was possible.

two seconds after that, he pulled the cord.

and two seconds after THAT the worst was over.

we had done it.

we had just fallen to near death and lived to talk about it.

the two of us flew back and forth for a few minutes, and each of realized then that we really COULD do anything in life we wanted to.

and i finally felt at peace with him again.

just him. and me.

and in this way, we are again, exactly the same.

i’d say it was totally worth it.