I’ve confirmed what I’ve long feared – I’m no where near cool enough to be friends with David Sedaris in real life.

You’d think I would be.

We’re both writers. People think both of us are funny. And we both date boys.

But when he asked if I knew that breast milk could cure eye infections, as I approached him Thursday night – I stumbled without ever finding a clever response. Likely because I’d never had the good fortunate to need breast milk for an eye infection.

My friend Beth and I had just been to his show, and then waited in a two-hour line set up roller-coaster-wait style in the hottest conference room this side of the Mississippi.

“Oh. Um. No. Um. Oh. Oh. Um. Thanks so much for coming to the quad-cities and signing everyone’s book. I think that’s really awesome,” I said faster than a speeding bullet. “I have a question for you. How do you think your career would be different if you were just starting out now? What with all the digital media and blogs?”

“Well, I think it would be worse. Everyone expects everything to be free now,” he told the newspaper reporter still chugging through her company’s pay cuts. Sedaris went on to explain how he’d negotiated his book contract for a three-book deal, and then started talking about how much he makes in advance.

At that point, he asked the two girls who still look for coupons before going to a sit-down restaurant,  how much we think he gets for an advance.

That’s what I said.

He gave us a blank stare that said, quite clearly “you are in no way cool enough to be my friend in real life.”

To quote Sedaris himself, “It seems open and shut now, but at the time I was truly conflicted.”

I swear to ink, if this man doesn’t tell me how much his book advances are, I’m googleing the crap out of it the second we get home.

“Well, let’s say I make $2 per book. The way an advance works, is that if they give me $3 million before hand,  I then have to sell 1.5 million copies before I start getting royalties,” he explained.

“Oh. Wow. Ok. I understand. Umm, my friend beth has a quick question I think.” ask him!” I whisper-yelled to her.

I CANNOT BELIEVE I DON’T KNOW THE MEANING OF DAVID SEDARIS’ FAVORITE WORD. I suck at life.

Phew. I wasn’t supposed to know what it means. It’s not even my language. Thank dictionary.

Then beth told him about the Web site Etiquette Hell because he’d told a few stories about rude people during the show and had requested more from readers during the signing. He then took out his notepad, wrote it down, and said he’d check it out.

Maybe we redeemed ourselves.

Oh. and Don’t worry. I gave him my blog card.

Sedaris doesn’t allow photos. At all. (Ask him about that time at Costco, if you ever get a chance), so I don’t have photographic proof this all happened. However, I will post the super-duper awesome picture I have of my signed copy of “When you are engulfed in flames.” You can be jealous if you want. I’m cool with it. 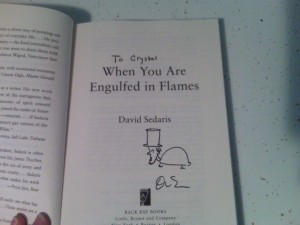 – yes. he drew that picture of the lincoln-turtle. no, I’m not sure why.

3 Comments on David Sedaris talked pretty and signed my book