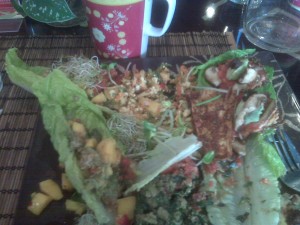 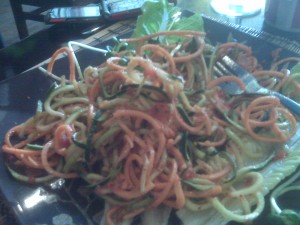 Still vegan (if you care) and im doing pretty well if i do say so myself. It’s been well over two weeks without the butter and the cheese and the eggs and the sour cream and the mayo…. mmmm mayo.

(shakes back to reality).

and im really NOT craving things as much as i thought i might. I’m doing just fine — as long as i eat at home. seeing as how im a loser and i eat at home alone almost every night, this usually isn’t a problem.

but this past weekend my family came to visit. and we really wanted to eat out, becuase it’s kind of an event to eat out together. BUT there’s NO freaking place for a vegan to eat in Oshkosh. so we had mexican food. twice. and when we ordered pizza i ate homemade spaghetti with vegan meatballs while everyone else scarfed down greasy mozzarella. (mmm. mozzarella).

and it was all just kind of sad. and don’t get me wrong, my family DID try to be accommodating. it was just that EVERY restaurant in town uses butter on umm, everything. so that leaves me SOL.

im thinking of starting an organic/ vegan restaurant. anyone out there interested? i kind of have bad credit, so if you’ve got the ability to get financing give me a call! it would be super fun and i could blog about.

and then i wouldn’t have to eat at home. all. the time. for. every. meal.