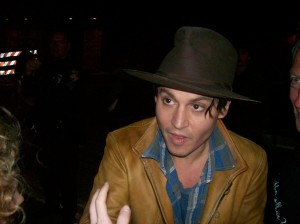 I totally took this!

Remember when I TOOK THIS PICTURE?!

It was actually a couple days after Johnny Depp touched my hand.

and now the photo lives on forever in a pretty black frame that i forced my roommate to allow me to place on top of the TV and then i pretend to watch TV but really i just look at the picture.

anywho, i took it in oshkosh, wi when mr. depp was filming “Public Enemies” like down the freaking block from where I was working.

and this Tuesday at mid-night the movie officially comes out!

there. now do you understand how excited i am?

of course im planning on the mid-night showing. duh.

and even if the movie totally sucks and is super predictable and has commercials for beef in it, i promise you i will still LOVE IT!

because me and mr. depp? we’re soul mates. and it’s only a matter of time before he figures it out people.

only a matter of time.

because i like livin on the edge, i renewed my illinois license plates today three days before they expire.

actually, i’d argue that three days is a long cushion for the whole process.

i was kind of stressed about it all because i had my mom’s address for the plates from like a year ago when i didn’t have a permanent home. im pretty sure there’s a law out there somewhere that says i should have changed that within two weeks of moving, which obviously didn’t happen.

also, i know for sure that you don’t have to put your car through an emissions test in her county. and my car’s engine light is pretty much always on. my understanding of the situation is that an engine light results in an automatic fail.

i could get the car fixed, but i think we all know i don’t do that.

regardless, i sucked it up and told the DMV that i now i live in mchenry county. nobody mentioned anything about an emission test though. so for now, ignorance is bliss.

my other problem is that i still have a wisconsin driver’s license. i can only assume that illinois has its shyte together enough to figure out that if my car is in illinois, i probably don’t live in wisconsin. but im pretty confident my mixed-up state will never figure that out, seeing as how everyone is kind of focused on all our children and families losing their social services right now. and im not exactly in a rush to get a new one seeing as how they cost like $20 or something.

anyway, when i finally got the front of the line i gave the the land of lincoln a $78 check. all they gave me was a little sticker i probably could have made myself with a new-ish version of photoshop.

and don’t EVEN get me started on the fact that i have to pay the state to drive my own freaking car because that’s just a bunch of crap.

seriously. i paid for the stupid thing, leave me be and let me pay for my freaking gas. jebus.

it’s bad enough i have to buy car insurance people.

let’s think of all the things i could buy with $78: great america season pass and a pop; a passport; 7.8 trips to taco bell, a new pair of running shoes and a matching sports bra; a domain and hosting service; 6 johnny depp posters; 70 pairs of old navy flip flops or the entire stock of any publicly traded newspaper company.

im just saying, i think i’d probably spend the money better than quinn. but whatever. it’s cool. just take my money. it’s not really going to anything important anyway. just rent and whatnot.

why is it that every freaking guy im in love with loves “The Royal Tenenbaums.”

dudes. it’s not a good movie.

i used to pretend to like it. all “ya. that movie ROCKS.”

but well, i had a glaring lack of related fan trivia.

but then they’d wonder how i could have seen THE BEST MOVIE EVER (their words. not mine) and concluded that it was just “eh.”

the ugly truth is, i’ve never actually seen it.

i don’t have any desire to see it and i don’t have any curiosity about film. i honestly just feel like i have other crap i could be doing, like picking up dog poop. or flossing.

so can we all just move on and hug already?

and lucky us, i just happen to have a copy of “Blow” that i could pop in. i mean, who doesn’t love johnny depp? seriously.