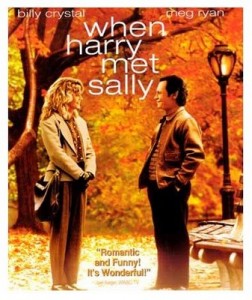 Last night i was feeling down about being single because i had just hung out with a crapton of happy families and their happy children, so i decided to watch the best, most honest, most inspiring movie ever made in regards to relationships: “When Harry Met Sally.”

the movie chronicles the relationship between harry and umm, sally. and how they randomly meet a couple times before finally getting their crap together and falling in love.

and along the way they address some of the common things men and women run into. right off they bat we have them talking about how men and women can never be friends because the sex part always gets in the way.

Sally: So, you’re saying that a man can be friends with a woman he finds unattractive?

Harry: No. You pretty much want to nail ’em too.

Then we move into the biological clock thing, which as soon-to-be 26-year-old woman, i have to sally’s perspective on the whole thing makes me feel pretty good about life. She claims it doesn’t really start to tick until you’re 36. phew.

and at one point sally and harry are talking about high maintenance women, and harry invents a category for sally that im pretty sure i fall into:

Sally: Which one am I?

Sally: I don’t see that.

Sally: Well, I just want it the way I want it.

and throughout the whole movie they play these little clips of couples talking about how they met. and some of them are CRAZY! like this one:

Woman: We feel in love in high school.

Man: Ya, we were high school sweet hearts

Woman: But then after our junior year, his parents moved away.

Man: But i never forgot her.

Woman: He never forgot me.

Man: Her face was burned on my brain.

Man: It was 34 years later when i was walking down broadway and i saw her.

Woman: And we both looked at each other and it was just as though not a single day had gone by.

Man: She was just as beautiful.

Woman: He was just the same. He looked exactly the same.

Umm. holy wow! it took them 34 YEARS to find each other again? and then when they did, they made it work!  that’s nuts people. NUTS!

But the thing i love most about this movie is that all the different love stories (harry and sally, as well as the other ones woven throughout) give me hope that i don’t have live my life like a text book fairytale. that i can have a happy marriage to somebody i meet in an unconventional way. and that people who have ups and downs can come out on the other side mostly up.

now, of course, the BEST scene in the movie, and maybe the best scene ever made: Harry professing his love for sally:

why is it that every freaking guy im in love with loves “The Royal Tenenbaums.”

dudes. it’s not a good movie.

i used to pretend to like it. all “ya. that movie ROCKS.”

but well, i had a glaring lack of related fan trivia.

but then they’d wonder how i could have seen THE BEST MOVIE EVER (their words. not mine) and concluded that it was just “eh.”

the ugly truth is, i’ve never actually seen it.

i don’t have any desire to see it and i don’t have any curiosity about film. i honestly just feel like i have other crap i could be doing, like picking up dog poop. or flossing.

so can we all just move on and hug already?

and lucky us, i just happen to have a copy of “Blow” that i could pop in. i mean, who doesn’t love johnny depp? seriously.