So, ya. I’m pretty sure that in about 3 minutes we’ll all have Google Voice – which magically types out voicemail messages – and this whole post will seem old-fashioned.

But that three minutes is going to feel longer than a bad city council meeting if we don’t go over some things in the meantime.

Sure, sure, in the beginning it was cute to leave looooong messages. Giving a play by play of your day, telling me what to get at the store, or even signing a song was all just super fun.

But those days are over.

At first I hoped social norms would just kick in and we could avoid this awkward conversation all together. Alas, it’s been at least 18 years since you got voicemail, and yet you still don’t understand.

There’s just a few things you need to learn and with a little training, I believe we all could be living in a better voicemail world by Halloween Christmas.

Let’s start on a positive note. Here’s how you should leave a voicemail:

See what I did there? I stated my name in the beginning. Then BAM, a second after that, you get the answer to your next question – Crystal who? Oh! Crystal from Madagascar. Duh.

After that you get my number. Right there at the beginning.

Then, I BRIEFLY explain why I’m calling. One 12- word sentence is all you need. Promise.

Then, once more – who I am, where I’m from and what my number is.

This should not be hard.

Alas, it seems to be for you.

Here’s an example of a BAD voicemail:

Heeeeeyyyyyyy. How’s it going? I was just calling to ummm let you know that I had some questions about the power point you sent. I’m wondering why you choose the color blue for the front page, and ummmm why you like Ariel font. Wait. Nevermind. That’s Times New Roman. Oh. And ummm, where did you get that clip art from? Was it online or from your computer or somewhere else? I just wanted to know because I used to make power points professionally at Power Points R-Us back in 1997, and I’m really good at it, so I thought I would ask you why you made those decisions. I’m going to be on an airplane from ummmm about 5 to umm, oh about 6 tonight, so if you need to reach me then you’ll probably just have to leave a voicemail. Hope to hear from you soon though. Oh and ya, my number is 234-567-89.

Wow. Ok. There’s a couple (a million) problems here and although names and details have been changed to protect the guilty, I swear to Verizon that I get voicemails like this from TONS of people. (You).

One. Why does it take you 7 seconds to say “Hey.” It’s a one-second word people. ONE. SECOND. I could use those extra seconds to Twitter, or take a vitamin, or apply hand sanitizer.

But no. I had to listen you extend the “ay” sound in hey for an extra six seconds. That’s six seconds I’ll never get back.

And while we’re on the topic, what is up with the Ummmms? Stop saying umm. It’s ANNOYING.

Why did you not tell me your name?!

Are you so selfish as to think you are the ONLY person ever to work on a power point with me? You’re not. I need to know if you’re someone from work, or someone from church, or someone from Madagascar, because I work on power points with people from all three of those places. But you didn’t leave your name, and you kind of sound like that hot guy I meet Friday night, so now I’m just confused.

Also, why are you leaving three million questions (some with your own answers) and a line from your resume on my freaking voicemail? Just tell me that you want to talk about the power point and I will call you and THEN you can ask your stupid questions about font and color choice. Trust me, I’m not going to remember what the heck you were talking about three minutes later when I call you, and then you will just have to repeat yourself.

And finally, after I wasted 4 minutes and 27 seconds to get to your freaking phone number you LEAVE OFF TWO DIGITS!!!

DO YOU HATE ME?

I FEEL LIKE YOU HATE ME WHEN YOU DO THAT!

In the future, you should know that leaving your number at the beginning and the end will help avoid this problem. And then I will not hate you. (win-win).

Now, obviously there are exceptions to all of these rules.

For example, boyfriends and best friends can say whatever the crap they want on my voicemail, because I actually care about everything they say. And they don’t have to ever leave their number ever. Also, moms and roommates don’t even need to leave a voicemail at all, because chances are I’ll just talk to you within a few hours anyway.

Oh, and if you’re leaving me a compliment, I usually can overlook a drawn-out Heeey.

And obviously if there’s a situation involving a hospital, a winning lottery ticket, johnny depp or time travel you can talk as long as you want.

If none of those things apply to you though, please just stick to the color-coded example voicemail above, press pound for more options, or 4 to repeat your message, and have a fantabulous day!

i want to start out this post by talking about how tired i am, but im beginning to worry that i talk about being tired way too much on this site and that concerned folk might start to worry about me.

so instead, let’s talk about how there is NOTHING on tv on sunday mornings and how i probably waste like 8 hours a week flipping through channels waiting for either a XX:00 or a XX:30 so new shows will start.

oh. and how palin RANDOMLY QUIT!?

i mean, what the heck? i have been checking my blackberry like a crazy person looking at all types of news sites trying to figure out who will be the first to break the REAL reason behind her resignation.

come on alaska media, i know it’s a holiday weekend, but get your crap together and break some news for crist sake!

also, we should talk about mosquito bites. this just in: they still SUCK.

im pretty sure i have about 73 right now after sitting outside participating in fourth of july activities yesterday. and they’re itching.

holy crap do they ITCH!

i used bug spray. and then i got some in my eye and then it burned like crazy.

also, citronella candles are just one big scam, because they have never, ever worked at any outdoor gathering i have EVER been too.

on another note, i got a new cover for my blackberry: 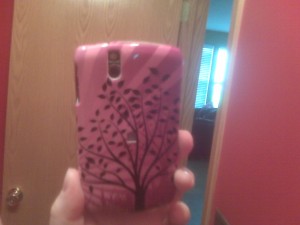 see how pretty it is?!

i heart the pink and the wonderful swirls and the lovely leaves.

i got it at a kiosk at woodfield. and it was marked as $25, but the stupid thing wouldn’t click closed and the sales lady was trying to tell me it was because i had a misshaped battery, which im pretty sure isn’t even a real thing.

so then i was like, “umm just forget it.”

and the lady was like, “no, no. i can close it.” and they did pretty much close it except for a little clip on the left side.

and i took it.

then i used the $15 i saved to get my eyebrows waxed.