So, ya, the move was pretty stressful.

I mean, I didn’t really think I was getting stressed out or anything, but I guess my body was stressed because on Friday night, just 12 hours before I was supposed to pick up the U-Haul, my “intercostal neuralgia” pain was seriously the worst it has ever been ever.

I’m talking stabbing pain that felt like a machete inside my right ribs, mixed with the feeling of being dropped off the side of a moving train and landing on a field of jagged rocks.

I was laying in my bed at about 10 p.m., trying to figure out how many hydrocodone I could take without running out before I was due for a refill, when I realized that all I really wanted to do was kill myself.

And then I started thinking that the pain that I was in, right then, was literally Hell.

That all I wanted it to do was end it. And that if dying was the only option, I was ok with that. In fact, I was sort of in favor of that.

So, I told my mom and my brother that I should probably go to the emergency room. And then I said  many, many swear words.

Pain does that to you.

They took me to some ER in Joliet.

I refused to go to the ER right by my house, because the doctor there was the one who originally misdiagnosed me with an ulcer and wasted a month of my life telling me I couldn’t eat tomatoes and giving me the wrong treatments, and what with all the pain I was currently experiencing, I thought I might punch him in the face if I saw him.

So we drove about 20 minutes south to go to the Joliet hospital.

As soon as I got there, they hooked me up with a wheelchair, which was awesome because standing up was killing me.

When they called me in though, they took me to some weird entrance exam area, where there was a whole bunch of patients sitting by computers getting their blood pressure checked and being asked how much they weighed.

I was in too much pain to fight them on that question, but I overheard some other lady tell the nurse, “Enough.” As in, “How much do you weight?” “Enough.”

And then the nurse was all, “I’m really sorry, but we need to know exactly how much you weight because we’re going to give you an antibiotic treatment, and the dosage is going to be based on your weight.”

And she was all, “Well I’m going not to tell you while he’s in the room.” I can only assume it was her boyfriend or her husband. But I suppose it could have been her son. Or maybe even her dad. Who knows.

And then the other nurse was all, “Why don’t you just write it down on a piece of paper and hand it to us?”

And then she grumbled and something else happened and then my pain continued to try and kill me and then somehow they ended up talking about her weight into kilograms and so I never did find out how much the lady weighed because MATH.

Anyway, after the initial check in, they didn’t even bother to put me in a room, they just had a doctor come over and examine me right there.

And she only sort of pulled the curtain back half way before she asked me to lift up my shirt so she could see my ribs.

I was in too much pain to care who I was flashing though.

I screamed in agony when she touched me. I’m pretty sure it was that and my large blue and purple medical binder full of my health information from the last six months that convinced her to give me a shot of dilaudid — a pain reliever the internet says is 6-8 times stronger than morphine.

Yes, it burned going in, but let me just tell you that shot was the best thing to happen to me since I first ate Taco Bell.

I want that life back.

I know I had it at one point.

I have faint memories of living and doing things where I could function without horrible pain dominating everything I did all the time, but it’s been so, so long.

I was told the shot would last about 8 hours, but I got a solid 10 out of it.

When it wore off though, I thought I was going to die again.

It’s crazy how quickly the suicidal thoughts come back.

Seriously. It takes about three minutes of pure agony before I’m ready to quit life.

The pain is just insane, and nobody should ever have to endure such a thing. I took two hydrocodone and cried for the 45 minutes it took for them to kick in.

And then I prayed that Walgreens would fill the hydrocodone prescription I had in my wallet a day early.

And they did. That is how I know there is a God.

I used that and the effects of a 20-day low-dose steroid pack my neurologist had prescribed me over the phone Friday afternoon to make it through moving day.

But actually, I just ended up carrying things like pillows and blankets to the car every once in a while, and then feeling the pain of death cover my body whenever my medications would wear off. And then I would suddenly lay down wherever I happened to be, and wait for another dose of medications to kick in.

I spent a bunch of time on the kitchen floor and on the grass next to the U-Haul truck.

The ER doctor told me I need to have a conversation with my pain specialist about going on stronger medications, except of course, my former pain specialist was a horrible, horrible person, and I don’t have a new one yet.

So I’m just taking hydrocodone so that I can live through each day. And I’m relying on a few more than the 4 a day I’m supposed to take.

You can judge me all you want, but when you feel like your ribs are trying to stab you in your heart, you do what you gotta do.

Because it’s either that, or kill myself.

On the upside, we did end up making it to Byron. Sometime around 10 p.m. Saturday night.

At least it didn’t rain. Moving in the rain always sucks. 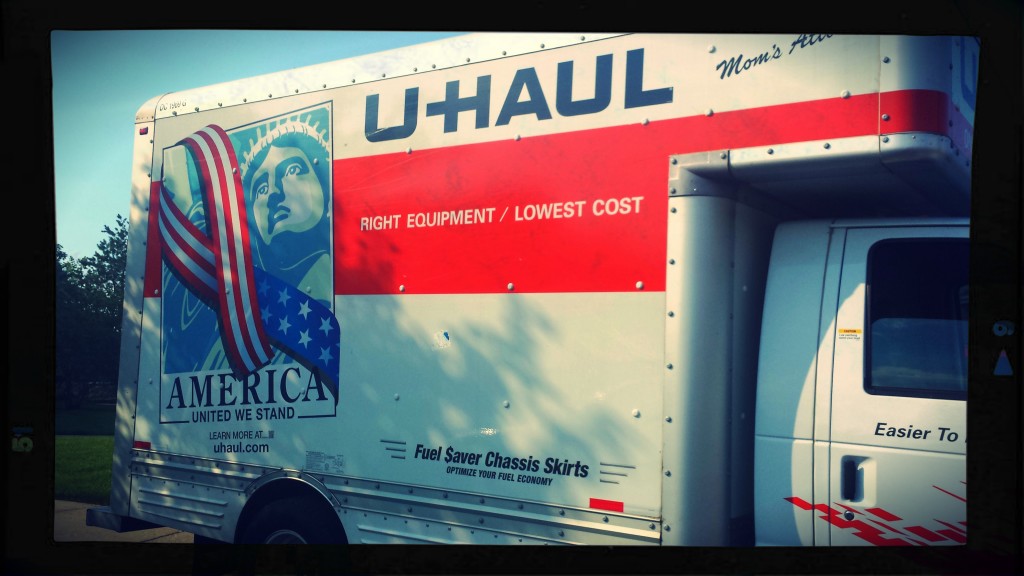