The only certainty is bad grammar > 2008 > November

1. ultrasounds. seriously, how the heck would the doctors have known about my gallstones had they not been able to use the magical device that lets them see INSIDE me?

3. my family’s love of mario kart. we all just sit around and play it on my mom’s supa big tv. and then we talk smack. and then i beat my brother steve because I’m awesome. and for once, from age 9 to 25, we all have something in common.

4. tofurky. have you TRIED this stuff? I can’t find any place near my house that sells it, but woodman’s in rockford sells it, so I bought $50 worth last night. true story. expect my breath to smell lake fake turkey for the next month or so.

5. having a job that coordinates with my major. YES, i get STA-RESSED (that’s stressed) at work. but at the end of the day, at least I’m not asking people if they want fries with that. or worse, if they’d like another press release (that’s a jab  at pr people, for those who didn’t notice) (i kid because I’m jealous of how much pr people make).

6. match.com. i joined because my roommate wrote a REALLY nice testimonial about me, and then people sent me e-mail that match.com assured me were from THE ONE, so I paid $35 for a month of service and read the e-mails. and for now all I’m going to say is that things are going well. (we’ll talk more about this later).

7. attached garage. which i have. and which allows me to avoid the age-old midwestern task of scrapping off my car in the morning.

8. football. because i can call my dad during the game and tell him I love hester and gould and he repliys that he loves them too (except when the packers kick their butts) (then we just cry together).

9. my church. finding a church is hard. finding a church that says the “Our Father,” has open communion and stained glass windows, and supplies me with apple pie occasionally is harder. i’ve found one. and i really like it.

so yes, i’m freaking out

So i went to the doctor today and i’ll go ahead and give ya’ll the lede — I have gallstones.

i got my little ultrasound this morning and as i was thinking that the jelly wasn’t as cold as everyone says it is while i wiped it off my stomach, the technician was all “the doctor WILL call you monday”

her: well i’m not supposed to “technically” read the slides, but see your gall bladder here. well, it’s supposed to be all black.

see how it’s not ALL black.

her: ya, there are four gallstones in there. but on the brightside, they seem to line up perfectly.

me: really? that’s the best you’ve got for a “brightside?”

her: well, ya. the doctor will call you monday. i’d stay away from spicy and greasy foods till then.

me to my mom like five seconds later: holy crap. i KNEW something was ACTUALLY wrong with me. i KNEW it.

oh. frick. something is ACTUALLY wrong with me!! AND i have to wait till MONDAY to find out what happens next.

since then, ive discovered way too much information online about gall stones for own good.

the upside is, i guess they won’t have to stick a camera down my throat and into my stomach.

sh*tty things that happen to me, short

1. I have been wearing my right contact for WAY too long. But for some crazy reason, I only have two right-eye contacts left despite the FIVE 5 left-eye contacts i have (no. i don’t know how i got all uneven, but I’m going to go ahead and blame it on the eye-scratch i got over the summer) (why? because it’s the only thing i can come up with). Anyway, I don’t want to switch it out for a new one yet. Instead, at night, I just close my right eye when trying to read neon signs as a means of keeping the blur factor down.

2. Seriously, it gets dark at like noon now. WTF? All i want to do is sleep and watch primetime, but then I realize that i have like 6 hours of work in front of me. Winter sucks. (Although I AM happy that there seems to be less snow so far this year.).

3. While we’re on the topic of winter, I’m pretty sure my car hates the season. the other day my friend was all “that’s your CAR making that noise? I thought it was the city’s tornado drill.” I should probably get it fixed, but I’m scared it’s going to cost me my life savings. instead, i will just continue to believe that either a. god will fix it or b. it will fix itself.

4. for those of you who don’t stalk me on facebook and therefore don’t already know this, i dyed my hair supa dark this weekend in honor of winter. (see pic below). also, call me crazy, but i really do think the black hair makes my head look thinner. 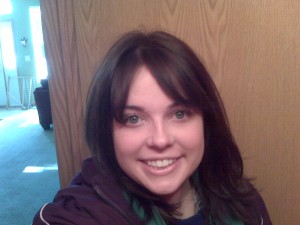 i know i need to get my bangs cut. but what do you think of the COLOR?

5. I joined match.com. yeppers, I did. and it’s going well so far. but if i get murdered and thrown in a ditch sometime soon, be sure to tell the cops about the guys on my ‘favorites’ list, because it was probably one of them.

6. I KNOW that i still need to design this site, but the problem is I can’t figure out how directorys work and i have a sneaky suspicion that i do in fact need to download something from wordpress.org onto a desktop.

seeing as how i don’t have a desktop, i’ve instead decided to avoid the problem for the near future. there is hope though, because i plan to get a laptop during one of those day after thanksgiving sales. (yes, I KNOW i should spend the money on my car instead. but you want me to BLOG don’t you? don’t you!)