this is the story of how a bush in front of my house spontaneously combusted.

i was driving home from work Sunday night, day dreaming about the cute firefighter i had met a few days before thinking how i kind of wished there was a fire and then he could rescue me. and BAM. there was a fire.

except he didn’t come. but a real fire truck did. complete with firemen.

apparently the bush had caught on fire, my neighbors had smelled smoke, and then they had rushed outside to throw a bucket of water on it. they also called the appropriate authorities. about three seconds later, i got home from work to burned bush.

and i shyte you not, the fireman tried to tell me that the mulch had somehow got hot enought at 10 p.m. at night to spontaneously start on fire, because, according to him THERE WAS NO OTHER EXPLANATION.

“Will it spontaneously combust AGAIN?!”

i was so tried i believed him. for real. and then my roommate was like “WHAT? THAT’S CRAZY!?”

and i was like, “oh. huh. a bush starting on fire for no reason does sound kind of crazy. now that i think about, im pretty sure the only time i’ve ever heard of that happening was in the bible.”

unfortunately the firefighter had already left when i figured that out though, so i have no freaking clue how the bush caught fire.

in case you’re one of those people who likes photographic evidence of bushes that spontaneously catch on fire, here you go: 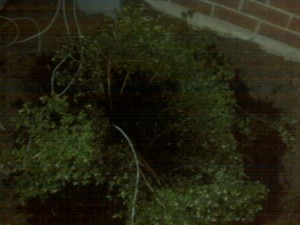 1. (note to non-wordpress users: this will mean nothing to you so feel free to skip down to number 2). WordPress keeps yelling at me to switch to WordPress 2.7.1, except im pretty sure if i try to do that, my whole blog will burst into flames. so instead, i have thus far decided to resist change in this one itsy bitsy aspect of my life.  however, if anyone out there is fluent in WordPress, feel free to be in touch and then come over to my house and then hold my hand and feed me ice chips while you walk me through the transition one step at a time with the patience usually reserved for children.

2. Some dork from springfield keeps leaving comments on my blog telling me that he hates me. first of all, although you think your “FYI” user name is anonymous, i can in fact trace the IP address. second of all, if you hate me, why are you reading my blog? third of all, i get paid per click on this thing no matter who does the clicking. i make exactly the same amount of money off the people who love me and secretly wish i would make out with them, as i do off the people who hate me and secretly wish i would die.

3. I heard a really cool story at church this morning. im reprinting it here because it kind of the sums up the way i look at life and my own choices to do the right thing. although my pastor shared it with us, he didn’t make it up so for accuracy purposes, im giving it to you here via this web site:

“Tell me the weight of a snowflake”, a sparrow asked a wild dove. “Nothing more than nothing”, was the answer. “In that case I must tell you a marvellous story”, the sparrow said. “I sat on the branch of a fir, close to its trunk, when it began to snow – not heavily, not in a raging blizzard: no, just like in a dream, without a sound and without any violence. Since I did not have anything better to do, I counted the snowflakes settling on the twigs and needles of my branch. Their number was exactly 3,741,952. When the 3,741,953rd dropped onto the branch – nothing more than nothing, as you say – the branch broke off.” Having said that, the sparrow flew away. The dove, since Noah’s time an authority on the matter, thought about the story for a while, and finally said to herself: “Perhaps there is only one person’s voice lacking for peace to come to the world.”

— From New Fables, Thus Spoke the Maribou, by Kurt Kaufer

4. Last night, my neighbors were playing music. outside my window. at mid-night. MID-NIGHT. and i thought, “surely there is a parent on my block who will share my outrage and go outside and ask these idiots to turn off their freaking radio in the middle of the freaking night.” but alas. that did not happen. so then i thought, “surely one of the 74 cops who live in my neighborhood – because the county courthouse is a block away – will wake up and go outside and tell these idiots TO TURN DOWN THE MUSIC!.” but alas that did not happen either. and after they played “blame it on the al.al.al.al.al.alcohol” AGAIN, i got up and went outside and told them to turn it down. and they said “fine” as though I was one being unreasonable.

The saddest part of this story is that i needed sleep because i had to wake up early for church, but i didn’t want to sound like a loser, so instead i told them i had to work Sunday. which i do, but not until 2 p.m. do think God’s mad that i didn’t go with church?

so, sometimes, after i write ALL DAY for my real job where i make real some a little money, it is super hard to come here and slave over a computer for you people my awesome readers. but i make time because i love you. and even though i have exactly 27 minutes before i have to hop in the shower and go off to another long day at the office, im here. writing for you. right now.

so, yes, yes, i saw star trek. and it rocked. and i went with a super duper star trek geek fan (who’s also cute. i know. weird) so he was able to explain everything to me. which was good, seeing as how there’s a thing at the end with the guy and the other guy that i totally DID NOT understand until he spent about 15 minutes explaining it to me afterward. but i get it now. i swear.

i would definitely recommend this movie to everyone and their mother, and their dog. it’s pretty fun. i mean, it was no “sex and the city” but watching all those magical special effects and pretty space ships on a big screen was worth the $9 for sure.

speaking of the number 9, does anyone else in chicagoland get confused by radio station phone numbers? i mean, there are like 74 area codes in a three-block radius of my house, but the stations just give out seven-digits. all “591-9696,” or “591-US99.”

i want to win rascal flatts tickets too guys. do i need to dial 312 for chicago? or will my 630 cell phone area code work? i don’t understand. how do i get through? and why don’t they have a freaking 800 number, which would just clear all this up?

how am i supposed to win, if can’t figure out how to call them?!

anywho, on to more exciting things. like the fact that Crystal Light is advertising on my blog. GUYS! MY NAME IS CRYSTAL! and their name is Crystal too!! how cool is that? im not gong to lie, i have bought crap tons of products because the word crystal was used on the package. crystal sprinkles, crystal clean toothpaste, crystal mint gum. it’s the least i can do seeing as how these companies named their stuff after ME!

and don’t even get me started on the fact that i work in the city of CRYSTAL lake. i know. fate right? the only thing cooler would be if my name were Jesus (hey-zeus). those guys rock.