I should be asleep right now, seeing as how I have to wake up in 6.75 hours.

I used to be a 9-hours a night kinda girl. Alas, not so much now.

And some other things.

Lucky for you though, I use this time to blog. So we’ve got that going for us.

Let’s see. Well first, thanks for all the wishes of support after my last post. It was much appreciated.

I do want to note that I know I write very honest things on here, and sometimes they come off as dark. I think most people freak out about life though. Actually, I KNOW they do. I’m great at making friends, and all my friends always tell me how freaked the F out they are.

I just write it down.

And then post it for everyone and their pumpkin to see.

I understand the consequences, and I’m cool with it. But like I said, thanks for the wishes of support.

Speaking of nothing, (as my dear blog-friend Krista would say) (speaking of Krista, that girl hasn’t posted in a hot minute) I’m pretty sure my roommate tricked me into a down comforter.

Being a vegetarian and all, I usually frown on such things. But when she offered me the best blanket eva in all the land (no doubt so we could keep heating costs down for a change) she assured me it was fake.

I’m here to tell you, I’ve had fake down – this is not that.

This is envelop you with love wrapped in hugs and smiles while sprinkling fairy dust in your dreams good. In the interest of warmth though, my current plan is to continue pretending it’s fake.

Moving along, I had a fight with a guy last night.

Not really a fight. More a “this is never going to work is it.”

I know. I know. You’re thinking “Crystal? You were dating someone?! What?”

I just like to keep those things on the down low. You understand. Maybe it’s because I knew this particular thing could never work.

Irregardless, I feel like someone went inside my chest and lopped off  a piece of my bleeding red heart.

And now it’s gone, and my heart will be stronger because of it in the end.

But today sucked. Today I felt sad and lost and lopsided.

And of course it rained today. The kind of rain that lasts for hours and makes you cry when you get a second to yourself in the car.

Which means it’s been Friday for nearly 10 minutes and it’s time to start a fantabulous weekend slated to include old friends, pizza and a corn maze.

first things first, im told bushes apparently CAN catch on fire for no apparent reason. per my friend pete on gchat:

[mulch] ferments, it doesn’t decompose.
well, it decomposes. but it doesn’t dry out per se, it holds moisture very well, and if you were to use a pitch fork to overturn a large pile of mulch, it is not uncommon for steam to arise from it.
if you ever venture into a landscape supply yard and see a front end loader scooping mulch out, there will be a lot, a lot, of heat underneath.
enough to produce a fire, i don’t know. not likely, in my humble opinion. but that’s just me.
in the summer i would say it could happen.
it’s actually why landscape yards or tree service operations have to turn their mulch on a fairly regular basis.

it still sounds like a made-up thing. however, IF this true, i want to take this moment to make a public service announcement: WATCH YOUR MULCH AND BUSHES! THEY MIGHT RANDOMLY START ON FIRE.

in other news, im all achy and feverish and im pretty sure its because i slept like 4 hours the entire time i was in south dakota and my immune system is shot to crap.

also, i ate cheese while i was there.

It’s SOUTH DAKOTA people! have you ever BEEN there? they serve cheese with their gas.

plus i really wanted zesto’s ice cream, which is hands down the best ice cream in the whole freaking world. actually universe. actually in existence.

i want to be clear, i do not in any way think eating the cheese is what shot my immune system to crap.

also, i came back to the land of lincoln and was solid vegan on Tuesday, Wednesday and Thursday.

but then Friday came.

and i had some more cheese.

i wasn’t even going to write about this here, because im pretty sure vegans around the world will be all “CRYSTAL SUCKS AT LIFE!” but i figure there HAS to be other people out there who struggle at least ONCE in awhile with veganism. i mean they can’t ALL live near whole foods and humas-selling sandwich shops right?

anyway, i still want to be vegan, and im going to try again. i just wish i had even ONE vegan friend who i could go to for support.

oh! and also my friend lyndon, who i actually haven’t seen in person since my undergrad days at WIU, is in mexico doing some sort of research stuff i think. i’d rather he was here, in illinois, hanging out with me. but lucky for us the next best thing is available. he started a blog. and you can read it here. go on. go read it now. 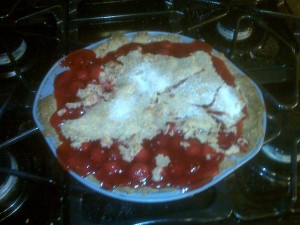 see. jayne from the church youth group would have seen this travesty coming from a mile way. when were gathered to make pies as part of the mission trip fundraiser Saturday, she kept insisting that I was going around screwing everything up. telling everyone i can’t property roll dough, rip wax paper or open a can of cherries, and saying things like “way to be crystal. way to be.”

whatever fine. yes. i put holes in the dough, yes. i tore the wax paper and yes. i kind of dropped the tin lid into the cherries.

but alas, i was in denial.

so i tried to take the recipe we used for the fundraiser (provided by the lovely Renee, who goes to our church and makes pie crust like a pastry angle) and bake a cherry pie for my mom last night.

except i suck at making pie crust.

i swear to the oven gods that i used the EXACT recipe i was given. i mixed the oil, flour, salt and cold water EXACTLY as i was told to. and WAM! i get a half-covered pie that has an overbearing wheat flour flavor

i just don’t understand it. i helped roll out 30 crusts Saturday.

THIRTY CRUSTS.  what the heck? how did this happen?

i was planning to make a movie-ready pie and then share the specifics with ya’ll, but seeing as how it turned out like a, well, just look at the picture, i think it would be better for all involved if i wait to figure out what went wrong and report back.

for those you who have your own pie crust recipes though and are aching to make a vegan cherry concoction, i WILL tell you that it’s just two cans of cherry pie filling mixed with cinnamon. that’s it. this is one of those awesome baking recipes that’s already vegan and doesn’t have to be tweaked.

and yes, the filling is delicious.

but even that didn’t make me feel better about this whole thing. i mean, it was basically PRE-MADE! just heat. spice and serve.

thankfully, my mom loves me so much that she barely even noticed how much i had screwed up, and even cleaned her plate when i gave her a piece.

and that right there folks. well that’s how i know my mother loves me for me.