The only certainty is bad grammar > weight loss

Things people say about my weight that weird me out:

I bet you’re beating off the boys with a stick now.

Umm. Huh? First of all, no. No. I am not. I live in the suburbs, where every man is married with 2.5 kids and a upside down mortgage. Second of all, why wouldn’t I have been beating them off with a stick before?

What the crap? I lost 54 pounds. How in the name of all that is caloric are you not satisfied? What if I just want to keep it down for a while. Gawd.

Oh. Wow. I didn’t recognize you.

Really? You didn’t? For real? That’s insane. I still have the same eyes, nose and pink purse. You need to look closer next time.

I bet you’ll be married in no time now.

Really? Is that all I needed. You’re probably right. I mean, heck I saw a nice young man at the Wal-Mart yesterday, I bet he’ll marry me, what with the fact that I lost weight and all. Give me a break.

You’re skinnier than me now. You suck.

Umm. In fact, you are the one who sucks. I worked my behind off for the last six months so I could weigh two pounds less than you and you’re JEALOUS? Why don’t you just give up soda for like a minute, lose your stupid two pounds, and we’ll call it all even.

Do you feel healthier?

What does that even mean? It’s like asking if someone feels “30” on their birthday. I feel like Crystal.

Uh. Dude. I LOST 54 POUNDS! I think that should at LEAST qualify me for a, “You look nice today.” How are you not going to say anything?

And now, one that someone said that was perfect.

Courtesy of my little sister. Just out of the blue. All, “Your thighs look smaller.” Made me giddy for bathing suit season.

1. Tomorrow is Groundhog Day, which is kind of a big freaking deal in my town because they filmed the only movie ever made ever about the holiday right here in Woodstock. The groundhog is slated to emerge at about 7 a.m., when I will be sleeping. Don’t fret though, I already made Woodstock Willie a deal involving grasshoppers and berries, so I’m pretty sure we can expect highs in the mid-60s by this time next week.

3. I need a pair of cross-trainer shoes so I can do Jazzercise again, but I have no money. (See: no.2). And I wanted to get a pair of shoes on clearance or something at Wal-Mart, but the only ones there that didn’t totally suck were $23. And I’m not abouts to spend $23 on some shoes that barely meet the minimum requirement of not sucking. So, just for kicks (pun intended) I went the New Balance store, where the cross trainers fit like little pieces of sunshine. But they were $70, which is more money than I’m living on right now, so I couldn’t buy them. In conclusion, I haven’t done Jazzercise yet since THE SPRAIN. Also, do you want to buy me shoes?

4. Apture is jacked on my site, and sometimes I just want to call someone on a real phone and tell them to come over to my house and fix my internets for free. Is that too much to ask for a free product I use? No. Not it is no. For some reason, Apture, (the program that gives readers pop-out windows when they hover over my links) got rid of the external embed system I was using, and now I can’t figure out how to fix the internal embed system, which I now HAVE to use, and I’m too tired to work it out. In the meantime, you will need to just click on things if you want to see what I linked to.

5. RE: Half a person, now, with Art! I know I already posted this “before” picture of me, but I have a new “after” picture, and when I look at it on my computer I have to keep reminding myself that it’s um, ME! So I was like, screw it, it’s MY blog, and I can post a new set of before and after pictures any freaking time I want. Am I right?

So here you go: 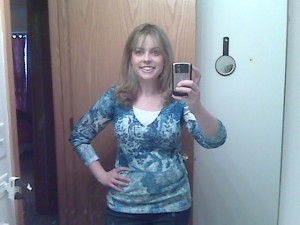 I went to the doctor today.

My friend April says I lost half a person.

I’ve been working with my doctor all this time, but I’ve only done monthly check-ins with a nurse so I hadn’t actually SEEN her since this summer.

She said I’m her prize patient.

She said she’s going to tell other patients about my success.

She said I could stop if I wanted, but I’m still shooting for the 140-ish mark. Hoping to hit that by the end of February.

Today was a victory all by itself though.

Today, when I stepped on the manual scale — the kind doctors have used since the beginning of time that kind of looks like a mix between a coat rack and a surgical device for giants — for the first time since high school the nurse didn’t have to move to 50-pound marker past 150.

I win, I thought.